Do You Remember Sony’s Watchman? This Guy Runs Super Smash Brothers on It!

One would think that the era of tinkering gadgets in one’s garage is long gone. Although finding stories like this proves otherwise, as well as make an old school geeks’ eyes water.

Super Smash Bros. Ultimate is one of the most popular games for Nintendo’s beautifully crafted Switch platform. But as it seems, it is not necessarily enough for everyone.

‘NESNerd427’ shared a picture on Reddit showing that the game can be run on a portable TV from the 1980s.

NESNerd427 first converted the HD signal coming out from the Switch via mini HDMI to analog using an A/V adapter. The next move was to connect the adapter to a DVD/VCR unit which has coaxial output. That wouldn’t be enough without boosting the signal for what task he used a Cable/VCR VHF amplifier, so the signal was strong enough to be broadcasted through a regular RCA TV antenna.

This is for jameslionbreath who asked how I made this crazy setup. So, here you go from r/supersmashbros

All that together enabled the Watchman to show the game, although its original goal, as of the portability, is partially lost. The player has to be quite close to the whole samsara of converters in order to enjoy playing on the Watchman’s 1.8” screen.

Old is the new trend

Gaming is a special world where every day brings some new high-end development. It can be a more powerful processing unit, a wider screen with crisp resolution, or virtual reality glasses; innovation follows innovation fueled by competing tech giants. 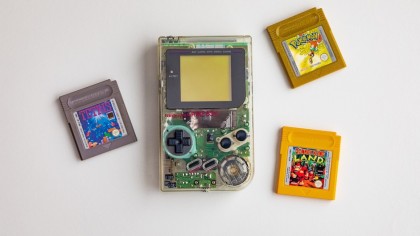 That being said one cannot disregard the 2010s general trend, a nostalgia towards items from the past, in gaming too. A generation who played video games from as early as they learned how to bike grew up and became consumers.

NESNerd427 is not alone out there, as we reported earlier this year, a blogger published a tutorial on how to convert an old Game Boy into a wireless gaming controller. Companies, seeing the demand articulated through those tinkering performances, started targeting people hungry for retro.

There is a bunch of devices loaded with old-school eight-bit games in a past-evoking jacket on the market currently, just like this Game Boy-like console, or the one modeled after the immensely popular Nintendo NES.

While there is a race to bring digital entertainment as close to our built-in sensory system as possible with VR and the perfecting of 3D modeling, the throw-back mania is peaking at the same time.

The reason behind this phenomenon could be, in addition to the nostalgia, that the boundaries between the two worlds are easy to see. Spending time with one of the new-old gadgets can open the eyes of the player to the world around in a way so that they feel the difference between gaming and life.

Manipulating, re-designing, or tinkering- these are not just fun activities to do, they also bring back the notion of the pioneer age when the user was also a co-creator.