A childhood accident led a contact lens to migrate into a patient's eyelid. The device then stayed there asymptomatically for nearly three decades.

Getting a contact lens lost in your eye is a common fear amongst the devices' wearers. For the most part, eye professionals have reassured people for years that such an event was very unlikely, if not impossible.

However, last year a woman made news headlines when doctors discovered 27 pieces of contact lenses stuck in her right eye. Now, another case has surfaced bound to lead to more contact lens-related worries.

The case of the hidden lens

A report published in BMJ Case Reports tells the story of a 42-year old woman who visited an ophthalmologist due to a swollen drooping left eyelid. The woman had experienced this discomfort for about six months.

The ophthalmologists then proceeded to surgically remove it. What they found inside left the woman bewildered.

A rigid gas permeable (RGP) contact lens had been encapsulated within the woman's upper eyelid soft tissue. However, the patient could not understand where it could have come from.

It was only when her mother recalled a childhood accident that the mystery was solved. An incredible 28 years earlier, the patient, just 14 years old at the time, had been hit in the eye with a shuttlecock during a game of badminton.

She had noticed that her contact lens was lost and that she was never able to find it but had later on forgotten the experience. She had, however, never worn hard contact lenses again.

The doctors speculate that the RGP lens migrated into the patient's eyelid and stayed there for 28 years. Shockingly, the foreign objected managed to do so asymptomatically.

The only effect the women reported was that her left eye was droopy but not enough to cause concern. The ophthalmologists are also perplexed as to what triggered the RGP to start causing swelling and inflammation nearly three decades after the childhood trauma that lodged the lens in its hiding place. 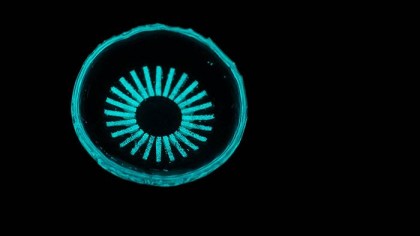 What the story reveals is that it may be wise to start approaching these medical devices with a little more caution. With technology advancements producing ever more applications for contact lenses, ranging from delivering medicine to communicating through wifi, we may need to consider all potential mishaps before proceeding with further upgrades.

The devices already come with certain warnings and have also produced their fair share of accident-related horror stories. We can only imagine what could go wrong with say a contact lens that could shoot laser beams!