Doctors in Mumbai’s Nair Hospital removed the tumor which weighed almost 1.9 kilograms. The tumor was so big that it looked as if there was another head mounted on top of the patient's head.

Doctors in India have operated on what could be the largest brain tumor in the world, according to news reports.

The patient, Santlal Pal, a shopkeeper from the northern state of Uttar Pradesh, lived with the large mass on his head for three years before the surgery was performed to remove the tumor, the BBC reported on Thursday.

Before the surgery took place, three hospitals in India had told him the tumor was inoperable. The tumor reportedly weighed almost 1.87 kilograms, bigger than the patient’s own head.

"We have not found any tumor as big as this," Dr. Trimurti Nadkarni, who performed the operation, said. 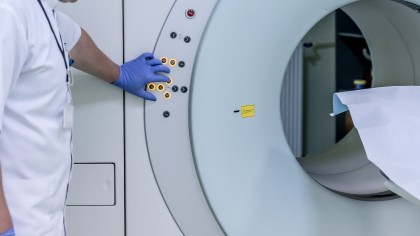 He said he had removed a 1.4-kg brain tumor from another patient in 2002. The operation took six hours at Nair Hospital in Mumbai, India.

If the tumor had not been removed, it could have led to further problems, such as paralysis and neurological damage. It is hoped that Pal will regain his vision. During the operation, the doctors had to cut open the scalp and remove the tumor. The part of the tumor within the skull was removed by making an opening in the skull.

The patient is currently recovering

Pal is currently recovering in the intensive care unit and is in stable condition, local media reported. He needed 11 units of blood during the operation and after that, he was connected to a ventilator for a few days.

The doctors at the Nair Hospital are currently waiting on test results to see the type of brain tumor it is and whether it's cancerous.

His recovery greatly depends on the nature of the tumor. If it's cancerous, he may need further treatment, such as radiation and/or chemotherapy,” Dr. Nadkarni said.

Ever since he was the age of one, Santlal Pal lived with swelling of the scalp, heaviness, headaches and poor vision in both eyes.

Scans revealed the tumor had invaded the brain on both sides of the midline through his skull bone. The patient's scalp had swelled up so much, he appeared as if he had two heads.

The medical literature is full of unusual cases, from the story of a man whose seizures were triggered by doing Sudoku puzzles to the report of a woman who suffered a painful reaction to a snake bite 50 years after she was bitten.

A patient may show an unusual connection between a symptom and a disease, such as the story of a 10-year-old boy whose earache was due to an intestinal problem. A case may lead to a better understanding of a common condition by highlighting a rare symptom that the condition can cause.

Some cases may also draw attention to an emerging problem that is becoming increasingly common as the trends in society change, such as newly popular weight-loss supplement which causes liver damage.