A unique case reported this week found that a potential allergic reaction to tattooing in an immunosuppressed woman may have led to inflammatory myopathy.

A unique and unusual report published this week in BMJ Case Reports revealed the first ever recorded instance of a tattoo responsible for chronic pain. Doctors at the Trauma and Orthopaedics, NHS Greater Glasgow and Clyde, Glasgow, UK detailed the patient's medical history that led to an immune disorder and years of ensuing pain.

Pain linked to the tattoo

"We present the first documented case of inflammatory myopathy as a complication following tattooing in an immunosuppressed individual. This unusual case presented as distal thigh and medial knee pain and it was only after some time that a link to the tattoo was made," said the report.

The patient, in this case, was a woman who had received a double lung transplant in 2009 and was on immunosuppressing medications to ensure her body would not reject the new organs. Immunosuppressed patients are at higher risk of infection and therefore of tattoo-related complications, however, despite this, the women had already safely tattooed her right leg.

It was when adding another tattoo on her left thigh, that the patient first developed a mild rash. A week and a half later, both her left leg and thigh began to hurt unbearably.

The patient underwent many tests with no explanation found for her pain until a biopsy finally revealed a form of chronic muscle inflammation called inflammatory myopathy. The doctors determined the tattoo must have been the trigger.

“While we acknowledge that there is no evidence to definitely prove the causative effect, the timing of onset and the location of the symptoms correlated well with the tattoo application and there were no other identifiable factors to cause the pathology,” the doctors wrote in the report.

Allergic reactions to tattoo pigment are common with reactions to red tattoo pigments as the most pervasive. The doctors stipulated that such an allergy in a weakened immunosuppressed immune system could have resulted in the chronic myopathy. 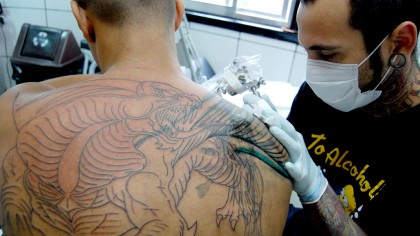 "This serves as a reminder to consider tattoo-related complications in the differential diagnosis of unusual atraumatic musculoskeletal pain, especially in immunosuppressed individuals," added the doctors. They also issued a reminder that long-term immunosuppressed patients, often being young adults, are more likely to desire tattoos and should, therefore, be advised of the potential dangers.

All is well that ends well in this story as the patient did recuperate from her myopathy after three years of physical therapy. The case, however, will now serve as a warning and hopefully deterrent for other immunosuppressed individuals.

A 2012 study by the Danish Environmental Protection Agency found that some tattoos can contain toxic carcinogenic compounds. Meanwhile, a 2016 Australian government study found that one in five tattoo inks did not meet health standards.

The European Society of Tattoo and Pigment Research, established in 2013 to educate the public about the dangers of tattooing and establish safer guidelines for the practice, has reported that barium, copper, mercury and other unsafe components where found in many tattoo inks.

49 Interesting Facts and Stories About the Human Brain

Decoding Animal Talk: How AI May Help Us Speak with Animals