Dogs Are Turning Blue in Mumbai Because of River Pollution

Blue dogs have been spotted wandering around the city of Mumbai in India. The dogs may have been exposed to toxic pollution that has caused their white fur to turn blue. Stray dogs often look for food near the Kasadi River in the Navi district of the city. The river is subject to contamination from the industries that line its banks. Animal rights activists vow to get to the bottom of the mysterious colored pooches.

Arati Chauhan from the Navi Mumbai Animal Protection Cell said it was “shocking” to see the dogs white fur turned bright blue . “We have spotted almost five such dogs here and have asked the pollution control board to act against such industries,” he said. The polluted stretch of the river is close to an industrial park that is host to almost 1,000 factories. One of these factories makes detergents which may be the cause of the dyed dogs . The factory has been accused of releasing toxic dye into the river system. As the dogs paddle out into the river to find food, their fur may have reacted to the substance.

Local residents are angered by the blatant disregard by factories and it’s reported they have lodged complaints with the local authorities demanding action against the factories. Anil Mohekar from the Maharashtra Pollution Control Board has promised to get justice for the dogs adding it is illegal for the factories to release dye into the river .

A local fisherman told media that after numerous complaints from residents about the stench from the river , pollution levels had been reduced, however, they were still at unsafe levels.

The water in the Kasadi river in the Maharashtra State in Western India is deemed unfit for human consumption, its pollution levels are reportedly 13 times above the ‘safe limit’. 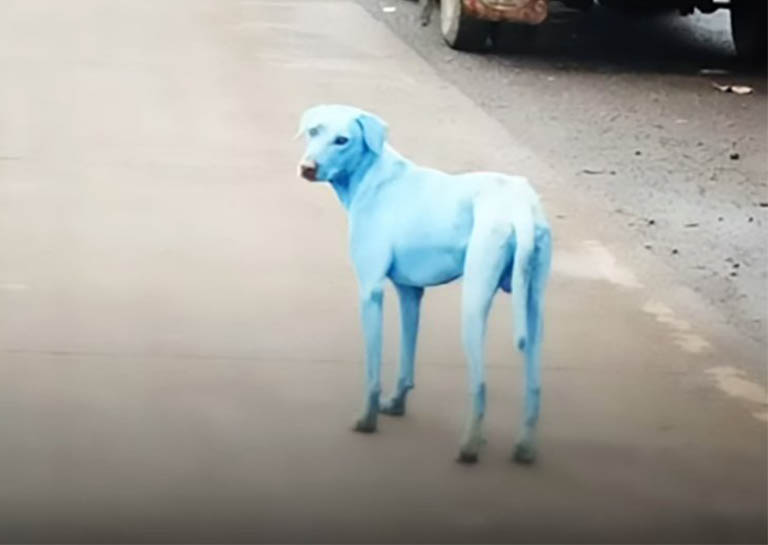 India has a chronic issue with river pollution, one of its most famous waterways, the Yamuna, a tributary of the famous Ganges has been declared dead by ecological activists.

The large waterway runs clean and healthy for the first 250 miles (400km) of its life from the Himalayas, but then it hits Delhi and is faced with an onslaught of pollution from sewage and industry. From here the water is black and lifeless supporting no animal life. But the religious, social and economic lives of Delhi’s inhabitants go on.

The waterway is still a source of drinking water and a place to wash and pray for many locals. But it is not without its costs. Many people that interact with the lifeless water are sick.

The opening up of the Indian economy in the 1990’s led to massive immigration into cities and exponential growth of factories and industry. Pollution was left unregulated and has led to the huge amounts of toxic waste being dumped into many of India’s rivers and waterways. While government projects are now attempting to tackle the damage, the case of the Mumbai blue dogs is proof it may be too little too late.

SEE ALSO: Dogs Are Turning Blue in Mumbai Because of River Pollution