Domino's Pizza is Filling Potholes Across US Streets

The leading pizza company has launched a new project aimed at making city streets safer for the transportation of their product.

Leading pizza company Domino's Pizza revealed a unique campaign that will see the firm fix potholes for cities around the US. The initiative called "Paving for Pizza" is calling for customers to nominate their cities to qualify for the road repairs.

"Have you ever hit a pothole and instantly cringed? We know that feeling is heightened when you're bringing home a carryout order from your local Domino's store. We don't want to lose any great-tasting pizza to a pothole, ruining a wonderful meal," said Russell Weiner, president of Domino's USA in a statement.

"Domino's cares too much about its customers and pizza to let that happen."

"Domino's cares too much about its customers and pizza to let that happen," added Weiner. It seems the company puts its money where its mouth is.

Domino's has already collaborated with four municipalities in Bartonville, Texas; Milford, Delaware; Athens, Georgia and Burbank, California to fix the road conditions they say are interfering with the delivery of their products. The pizza company also urged customers to nominate their town for future repairs by entering the zip code at pavingforpizza.com.

Selected cities receive funds to assist in the improvement of their roads. Current residents of cities chosen by the initiative have expressed both astonishment and gratitude regarding the outcomes.

The initiative's website features dedicated pages to each recipient municipality with details on the repairs and resident testimonials. Michael Montgomery, town administrator of Bartonville, Texas said he was "ecstatic."

"I didn't think it was possible but Domino's delivered on their promise to fix potholes," said the city official. The town saw three roads repaired and eight potholes filled with 75 tons of asphalt.

The initiative is supported by the slogan "bad roads shouldn't happen to good pizza" and includes a Pothole Impact Meter that illustrates a Pizza Damage Report according to road conditions. The conditions range from mild to catastrophic.

Although at first glance this might seem like a clever advertising ploy, the initiative has been labeled a "public-private partnership" opportunity by Athens city official Stephen Bailey. Other city officials were quoted commending the project for extending their repair funds. 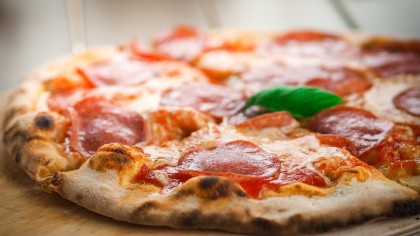 Both Bartonville and Milford officials reported achieving more pothole repairs due to Domino's support. Potholes fixed by Domino's are branded with the company's logo and the words: "Oh yes we did."

The company's creative and original marketing ploys seem to be paying off. Domino's today is the largest pizza company in the world based on global retail sales.

The firm has a global enterprise of nearly 15,000 stores in over 85 markets with global retail sales in 2017 exceeding $12.2 billion. It seems paving the streets for Domino's means paving the way to success.

A 'Lo-Res' Variant of Lamborghini's Countach Is Stalking Your Streets

The Road Patch Will Save Your Car From Hitting Random Potholes