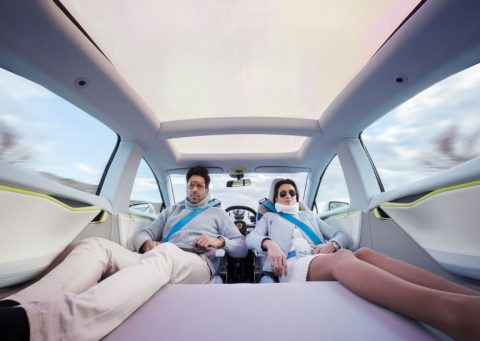 The widespread adoption of driverless cars is pretty much a question of when not if. The intersection of the internet and the automotive world is about to cross-pollinate big time and we're in a hyper innovative stage of driverless car development. What will happen and when will it happen? No one knows for sure, but it feels like it will happen fairly soon. There's still a tremendous amount of legal, safety, technological and ethical issues to iron out, but maybe drunk driving will be soon be looked upon as an absurd and boorish practice from a bygone era?

The topic of autonomous vehicles may not be a big discussion among average citizens, but there is currently a war going on behind the scenes. Will Google, Apple, Tesla, Uber or lesser known, Comma.ai, come out as the dominant leader in autonomous automotive technology? That's for you to hash out, but let's first explore how driverless cars work.

Levels have been established to describe the amount of automation that can exist in a car:

Level 0: The driver completely controls the vehicle at all times.
Level 1: Individual vehicle controls are automated, such as electronic stability control or automatic braking.
Level 2: At least two controls can be automated in unison, such as adaptive cruise control in combination with lane keeping.
Level 3: 99% automation. The driver can fully cede control of all safety-critical functions in certain conditions. The car senses when conditions require the driver to retake control and provides a "sufficiently comfortable transition time" for the driver to do so.
Level 4: The vehicle performs all safety-critical functions for the entire trip, with the driver not expected to control the vehicle at any time. As this vehicle would control all functions from start to stop, including all parking functions, it could include unoccupied cars. -Wikipedia

Autonomous cars detect their surroundings using radar, lidar, GPS, odometry, and camera-enabled computer vision. You may be familiar with radar and GPS, but what about lidar, computer vision and odometry? Lidar is essentially the word laser and radar combined. The distance of an object is measured by projecting a laser beam onto it and then detecting its return signal. Odometry is the use of data from motion sensors to estimate the change of an object's position over time. Computer vision is the process of converting visual images into descriptions of the world that can interface with other processes and elicit appropriate actions by a machine. All the sensory data from these sources is then analyzed by control systems in the car which then combine to form driving decisions. The autonomous car is literally covered with sensors. 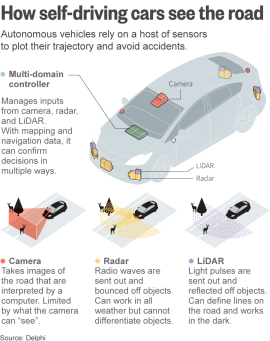 There is a major distinction between autonomous cars and self-driving cars. Autonomous cars will look like the vehicles we drive today, complete with steering wheels, that we allow to be driven autonomously when we choose to do so. Self-driving cars are a stage further on and will be created with no human drivers in mind. These are the kinds that Google is working on. The steering wheel will disappear completely and the vehicle will do all the driving using the same systems that the autonomous ones use. Many of the major car companies are actively working on their own autonomous vehicles.

Google has been a pioneer in the self-driving car technology field. It has enormous resources to dedicate to field research and is actively involved in both autonomous and self-driving technologies.

Tesla's Autopilot system for the Model S is very close to being autonomous, but it doesn't yet describe itself as that. Autopilot is in a stage of continuously improving itself. Here's an overly excitable Model S driver who first experienced the Autopilot system. He describes it as "creepy and wonderful":

While doing research on how driverless cars work, I accidentally stumbled upon a video that depicts George Hotz (remember the 17 year-old hacker who unlocked the iPhone for the first time?) giving a demonstration to Ashlee Vance of his driverless car that he created by himself. Hotz built an autonomous car in his garage and then formed a company called comma.ai which recently received US$ 3 million of funding from Andreessen Horowitz. I must admit, his self-built systems appear to be pretty amazing. According to Elon Musk, however, Hotz's operation could never deliver a seamless product to the public because he asserts that Hotz lacks dedicated resources. Read Tesla's full explanation here. It remains to be seen, however, who is correct in this matter.

Hotz is teaching his car how to drive based on real human driving, not pre-formatted engineering rules that define what safe driving should be. He states,

" ‘If’ statements kill.” They’re unreliable and imprecise in a real world full of vagaries and nuance. It’s better to teach the computer to be like a human, who constantly processes all kinds of visual clues and uses experience, to deal with the unexpected rather than teach it a hard-and-fast policy." -Ashlee Vance, Bloomberg Businesweek

His method is an example of deep learning AI technology and he asserts that it's superior to Mobileye. Mobileye is the technology that Tesla currently uses and modifies for its Autopilot system. This video of Hotz, who goes by the name, geohot online, will shatter your mind:

According to Bloomberg, it turns out Elon Musk at one point offered George Hotz a multimillion-dollar contract to work for Tesla, but Hotz turned him down:

“Frankly, I think you should just work at Tesla,” Musk wrote to Hotz in an e-mail. “I’m happy to work out a multimillion-dollar bonus with a longer time horizon.....”

“I appreciate the offer,” Hotz replied, “but like I’ve said, I’m not looking for a job. I’ll ping you when I crush Mobileye.”

It will be fascinating to watch as the battle rages on in the autonomous car wars.

By this point, driverless cars have already been involved in accidents and you may remember the Google autonomous SUV that recently got into a wreck with a bus:

And one of Google's self-driving cars got a ticket for driving too slow, but this was the first infraction Google experienced after clocking in 1.5 million miles on the road with its self-driving car fleet. The cop decided not to issue a ticket, but if he'd decided to, would he have issued the ticket to the car or the passenger?

One thing is clear, the future of driverless cars is being created before our very eyes but it's not entirely clear what form it will take. It's going to be weird, though.

How Do Laser Tag Guns Work?