The new and improved “Navion" chip tackles navigation and state estimation and is just 20 square millimeters and consumes 24 milliwatts.

A team at MIT responsible for the design of a tiny computer chip used to allow honeybee-sized drones to navigate has further upgraded their invention. The new and improved "Navion" chip is now smaller in size, 20 square millimeters, and consumes less power, 24 milliwatts.

A small but capable package

What the novel chip can achieve with this amount of power is nothing short of impressive. The minuscule chip can process both complex camera images, at up to 171 frames per second, and inertial measurements that allow it to efficiently and accurately assess its location in space for navigation purposes fit for a variety of cases.

“I can imagine applying this chip to low-energy robotics, like flapping-wing vehicles the size of your fingernail, or lighter-than-air vehicles like weather balloons, that have to go for months on one battery,” said Sertac Karaman, co-lead of the project and a member of the Laboratory for Information and Decision Systems and the Institute for Data, Systems, and Society at MIT. “Or imagine medical devices like a little pill you swallow, that can navigate in an intelligent way on very little battery so it doesn’t overheat in your body. The chips we are building can help with all of these.”

Although miniature drones have become quite common in the past few years, the issues surrounding them remain that most of their battery power goes into making them fly leaving little energy for any other operations regarding navigation and state estimation. To resolve this issue, Karaman and his team looked into combining algorithms and hardware in a single chip.

After a number of tests, they ultimately decided to forgo existing designs and build an entirely new chip. “This gave us a lot more flexibility in the design of the chip,” said team co-lead Vivienne Sze, associate professor in MIT's Department of Electrical Engineering and Computer Science (EECS).

They also conceived of a new design that would monitor how data flows and stores across the chip in order to minimize power consumption. “Any of the images we would’ve temporarily stored on the chip, we actually compressed so it required less memory,” explained Sze.

After additionally cutting down on any extraneous operations, the team successfully reduced the chip’s memory from 2 megabytes to an impressive 0.8 megabytes. They then adapted it to be easily reconfigurable to function with different cameras and inertial measurement unit sensors as well as suitable to a variety of navigating spaces from offices to warehouses. 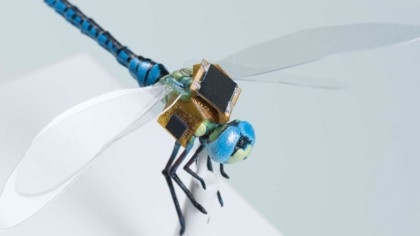 “While we customized the chip for low power and high speed processing, we also made it sufficiently flexible so that it can adapt to these different environments for additional energy savings,” Sze said. “The key is finding the balance between flexibility and efficiency.”

This resulted in the team effectively reducing the chip’s power consumption from 2 watts to a mere 24 milliwatts. The researchers are now working on demonstrating the chip's capacity first on a miniature race car and then eventually on a drone, and, hopefully, ultimately on a miniature drone.