Drones have helped engineers lay cables to a remote Welsh village that will bring them high speed broadband internet access.

By  Jessica Miley
Dec 02, 2017
The view from the cable carrying drone Openreach via YouTube

A fleet of tiny drones have helped bring high speed broadband internet to a remote wales in the United Kingdom. The cable company Openreach was tasked with providing the cable that would connect the community of Pontfadog in remote Wales. Openreach chief engineer Andy Whale discussed the challenges they face: “It's a bit different to connecting an apartment block in London, that's for sure. If we tried running the cable through woods it was also very likely we'd get it caught up in branches and other natural obstructions, so we figured the best option was to fly it in over the top of the tree canopy and then lift it up to make sure it was clear of the tree line." The drone wasn’t strong enough to lift the heavy cable itself, so instead, it was attached to super strength fishing line which it flew above the tree canopy connecting two points. The fishing line was attached to another rope, which was then attached to the cable. The cable could then be ‘led’ into its position by pulling the second rope.

The complicated mission successfully ended with the 20 or so community members getting internet access, that is providing them with speeds of-of up to 1Gbps. Retired school teacher, Chris Devismes, said the new cable had significantly improved their access: "It has made a world of difference to us. I live here with my two teenage sons and they're often online - watching films, streaming music or Skyping their friends. When all three of us were online at the same time, it could often be a struggle and things would start to buffer and freeze." Laying the cable with the drone took the engineers less than an hour to complete and will likely be used again in similar tricky terrain situations. 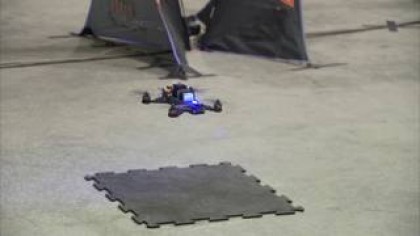 Drones put to work from making  deliveries to bridge building

Drones are becoming a familiar sight in many workplaces. They are helping plant trees and completing dangerous inspection work. In China, they are even building bridges. During the construction of the Xingkang Bridge in Sichuan Province, a drone was used to carry pilot cables from one of the bridge's tower to the other. The workers do this many times until this pilot cable is capable of carrying the weight of the massive steel cables that make the formation of the bridge. The use of the drones reduces the work time and cost of moving the thick steel cables significantly. Without the drones, the pilot cables would be string across between the towers using a boat or a inaccurate mini rocket. The drone allows the works precisely control over their delivery in a short amount of time with no risk of injury to themselves. The bridge is an ambitious engineering project stretching across the fast-flowing Dadu River on the edge of the Tibetan Plateau in southwest China's Sichuan Province. It is expected to be completed sometime in 2018 at a total cost of one billion Yuan.