Researchers at the University of California, Santa Barbara have developed a system that allows drones to map the interior of a closed structure. In essence, the team has created a way for drones to see through walls! While we are some way away from superhero type ‘x-ray vision’ the developments are pretty exciting.

The system works as one drone fires Wi-Fi through the targeted structure and the another picks up the signal. Then, working together, the two drones fly around the structure mapping the wave strength in different areas. The drones can then create a 3D map of what is inside the closed structure. As the Wi-Fi waves penetrate outside of the structure they also pass through whatever is on the inside. The strength of the waves depends on what obstacles they encounter, giving the drones enough information to start mapping. The autonomous drones produce high-definition 3D maps of the interior. 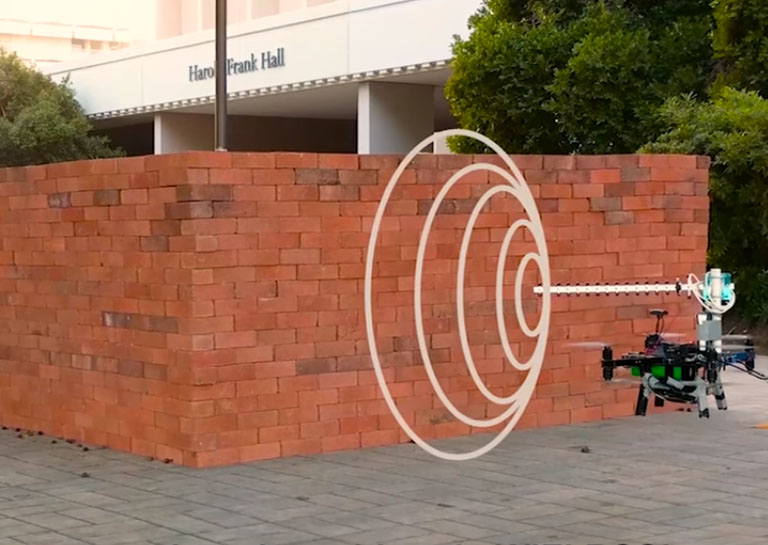 The result of the research was presented at the Association for Computing Machinery/Institute of Electrical and Electronics Engineers International Conference on Information Processing in Sensor Networks (IPSN) in April 2017.

“Our proposed approach has enabled unmanned aerial vehicles to image details through walls in 3D using only WiFi signals,” said Mostofi, a professor of electrical and computer engineering at UCSB.

Mostofi’s lab has been a leader in developing sensing and imaging using everyday radio frequency signals such as Wi-Fi. The system uses materials that are available off the shelf including a Google Tango tablet and a Wi-Fi router as well as a Raspberry Pi and a Wi-Fi card for the receiver.

Using these relatively cheap and accessible materials means the system can have a broader reach. Some applications already suggested by the team include emergency response and geological exploration. The project has the potential to assist in indoor mapping in emergency situations when you need to understand the building layout without accessing the interior.

It could also have a big impact for geological excavations, providing researchers with clues as to what the interior of a structure could look like before entering.

Previously the research lab had worked extensively with ground-based robots to do 2D mapping. The move to 3D mapping was possible by the drones' ability to approach the structure from multiple angles. "Enabling 3D through-wall imaging of real areas is considerably more challenging due to the considerable increase in the number of unknowns." Mostofi notes.

Mapping interiors with autonomous drones have been around for a while but these drones need to be inside the interior to map. The team at the Sanborn Platform for Indoor Mapping (SPIN) have produced some great stuff.