When talking about states of matter things used to be very simple. There were solids, liquids and gases, and then plasma followed on along with Bose-Einstein condensate, supercritical fluid and others. The latest in-thing when it comes to states of matter is dropletons, which although they have a resemblance to liquids, occur due to different circumstances altogether. This unexpected discovery came about when the University of Colorado Joint Institute for Lab Astrophysics turned their focus to light on gallium arsenide for the creation of excitons. 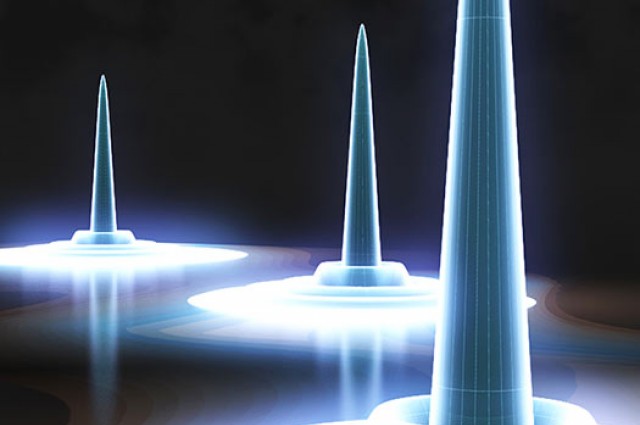 When a photon hits a material, more so a semiconductor, excitons forms. Should an electron come loose, in other words excited, left behind is an electron hole. Should forces of other charges close by keep the electron close to the hole it is attracted, then a bound state occurs which is known as exciton. The Excitons have the name of quasiparticles as the holes and electrons act as a single particle.

Take into account that solar cells are semiconductors and formations of excitons are just one step towards making electricity. If we could understand more about how excitons are formed and how they behave it could lead to sunlight being harvested more efficiently.

Andrew Almand-hunter, a graduate student was undertaking the task of forming biexcitons. These are two excitons which have the behaviour of a molecule. He did this by focusing the laser to a 100nm dot across and left it on for shorter and shorter fractions of just a second.

However the experiment didn’t go as planned. He said “When the pulses were lasting less than 100 millionths of a second exciton density reached a critical threshold. “We expected to see the energy of the biexcitons increase as the laser generated more electrons and holes. But, what we saw when we did the experiment was that the energy actually decreased!”

Of course the team knew that they hadn’t created biexcitons, but they were unsure of just what they had found and so contact the theorists over at the Philipps-University. A model was created after theorists said that they thought the team had made droplets of between 4,5 and 6 electrons with holes.

The holes and electrons are not paired but the dropletons are small enough that they have the behaviour of quantum mechanically. This is the same as they would if the dropleton was nothing more than grouped excitons. However they formed what is known as quantum fog of electrons and holes which happen to flow around one another along with being able to ripple just as a liquid would, instead of being discrete pairs. The difference between them and other liquids being dropletons a finite size and outside of which the hole/electron link breaks down.

One of the most remarkable things to come from this is that the dropletons are stable, at least by the standards of quantum physics and the discovery has earned a place in Nature. Their lifespan depends on them living inside solid materials with them lasting just 25 trillionths of a second. However this is typically enough time to allow scientists to study their behaviour and the way the environment shapes it. Bear in mind that at this size they can only be seen when using conventional microscopes.

Mackillo Kira from the Philipps-University recently spoke with Scientific American; he has provided much of the theoretical grounding. He explained "Classical optics can detect only objects that are larger than their wavelengths, and we are approaching that limit," and went on to say "It would be really neat to not only detect spectroscopic information about the dropleton, but to really see the dropleton.”

Professor Steven Cundiff, the JILA lab leader said “Nobody is going to build a quantum droplet widget." Nevertheless the work done may help when it comes to the understanding of systems when multiple particles interact quantum mechanically.

Should Digital Information Count as the Fifth State of Matter?

9 Inventions That Were 'The Next Big Thing,' but Totally Flopped