This company wants to construct an entire island to generate wind power and then use high-efficiency cables to transfer that energy to either the United Kingdom or continental Europe.

A massive Dutch electric company could create one of the world's most impressive 'wind farm islands' in the North Sea off the East Yorkshire coast of England. The giant farm would be operated and backed by TenneT -- a national grid from Denmark that could reach as far as Belgium and Germany. 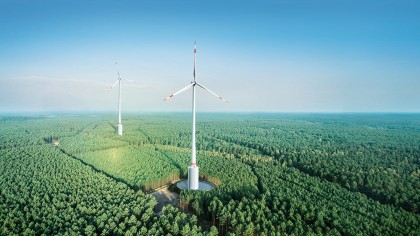 Ultimately, TenneT's backers and engineers estimate that the plans could be billions of euros cheaper than extensive power cables and traditional wind farms by using a long-distance underwater cable between the United Kingdom and the Netherlands. In order to fit all the equipment for wind farming, the island itself would need to take up between 5 km and 6 km. The project is estimated to cost €1.5 billion (£1.31 billion or approximately $1.77 billion USD).

"It’s crucial for industry to continue with the cost reduction path," van der Hage said in an interview. "The big challenge we are facing towards 2030 and 2050 is onshore wind is hampered by local opposition and nearshore is nearly full. It’s logical we are looking at areas further offshore.”

Rather than continue to put mile after mile of cable down to connect the power, TenneT's engineers took a different approach. They want to use shorter, more affordable cabling to move power from offshore turbines to land. Once 'on land,' converters will transform the current from alternating current to direct current in order to then be sent to either the United Kingdom or the Netherlands for usage.

And, as news outlets reported, that unique cable would allow wind farms the ability to give power to whichever country's market was paying the most money for power at any given time. Thus, the power would always have a use.

Huub den Rooijen, TenneT's director of energy, minerals and infrastructure, said in an interview with the Guardian, "In order to continue unlocking the UK’s world-leading offshore wind resource it’s important we think long-term on opportunities for additional cost reduction, including the potential to trade offshore wind electricity internationally."

Jens-Otto Horslund serves as Denmark's ambassador to the Netherlands. On Twitter, he called the plans "interesting."

Peter Atherton, an energy analyst at Cornwall Insight, said it was true that the best nearshore sites had been taken already, but the power converters that TenneT planned to build on the island were costly and relatively rarely used in energy infrastructure.

"It’s going to be expensive compared to what they produce locally [from wind farms nearer the coast]," he said.

"It sounds a very interesting idea ... as the industry matures, you’d very much expect them to start thinking outside the box. Whether the economics pan out, whether you really can sell North Sea wind out to the continent, is questionable."