Earth Sets Record Temperature for the Third Year in a Row

There is much debate about how global warming is affecting our planet, if at all. The gradual increase in the average temperature of the Earth's atmosphere and its oceans is often dismissed as conspiracy theories relying on fabricated data.

Former vice president, Al Gore was even labeled as 'hysteric' when he founded the 'Climate Reality Project'. Some insinuated that this was his way of dealing with his failed election and that his speeches are simply rants of an "attention seeker".

But the truth of the matter is that in 2016, the measured average Global temperature was 0.99 degrees Celsius higher than the mean value of the 20th century. This is according to the research done by scientists at NASA’s Goddard Institute for Space Studies (GISS), which gives credit to the theory.

Global Warming is attributed to a rise in greenhouse gasses such as carbon dioxide and air pollutants. This can be as a result of the burning of fossil fuels, increased byproducts of factory waste and other human activities affecting the environment.

A rise in global temperatures can cause melting of the polar ice caps, increasing sea levels and affecting the severity of storms and weather patterns around the world, as we have seen until now.

According to independent analyses by NASA and the National Oceanic and Atmospheric Administration (NOAA), the recorded surface temperature of the earth has never been higher than in 2016. This dates back to the beginning of modern day recordkeeping in 1880. 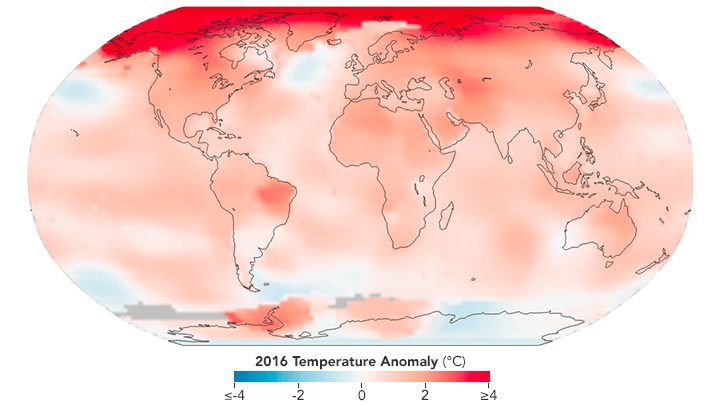 2016 was not only the hottest year ever to be recorded. Eight out of 12 months of 2016, from January to September, with the exception of June, were the warmest on record for those months.

The animated figure below illustrates the observed temperatures for every month between 1880 and 2016. Each line indicates how much the temperature was above or below the annual global mean value. The values on the right list each year that a global record was set.

With this developing data, we have a clear indication as to the direction in which our planet is heading. It is now that we need to drive change, or we may be in for a very hot summer.