Opening its doors just this past September, the gmp Architects' Guangxi Culture & Art Center in Nanning, China is another strong example of how the German architecture company uses their singular design philosophy to produce results that can not only enhance the surrounding environment but produce results that are equally modern, as well as timeless. 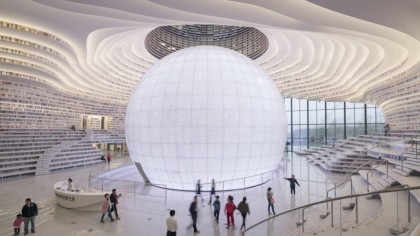 The Hamburg firm, Architects Von Gerkan, Marg and Partners (gmp), won the architectural competition for the cultural center four years ago, immediately being commissioned to complete the project. The Guangxi Culture & Center will host a series of events for the South China region including a major upcoming New Year's concert in 2018.

For the uninitiated, Nanning is the capital of the Guangxi Zhuang Autonomous Region in Southern China. The large, populated city is also known as the "Green City" because of the abundance of lush green subtropical foliage that subtly weaves its way throughout the city. This Southern region of China itself offers some of the most unique terrain, as well as geological environments in the world, making it a point of inspiration for gmp.

Using the region's surroundings as insight and as a major focal point for the project, gmp created the eye-catching, Guangxi Culture & Art Center. These design themes can be easily seen sprawled across the exterior of the building.

When looking from the center of the city, one may notice that the building resembles that of the karst mountain formations  (topography formed from the dissolution of soluble rocks such as limestone, dolomite, and gypsum), which are so prevalent in this Southern Chinese Region.

Adding to the city's attractiveness and enhancing the metropolitan skyline, the building's "floating" exterior brings together the performance halls under one unified design.

Like a white karst mountain formation, the aluminum wrapped building contrasts with city's surroundings but yet adds something familiar to the region.

The building itself is moderately big compared to other similar buildings across the world. The Guangxi Culture & Art Center has an approx. of 115,000 square meters of the gross floor area of the building, comprising of an opera house with 1,800 seats, a concert hall with 1,200 seats and a multipurpose hall that can seat up to 600 visitors.

Though the building's appearance and functionality are rather modern, gmp has made an effort to keep the interiors reminiscent of some of the more older and traditional great concert halls across Europe.

Facing the south-west, the opera house in the Guangxi Culture & Art Center seating is laid out in the shape of the "traditional opera house horseshoe",  ladened with gently curved wood paneled surfaces that optimize the acoustics in performances.

On the eastern side of the building, you will find the concert hall, also designed and optimized for symphonic performances.

The Chinese intend to use the very versatile building for a wide array of programs in the region, including but not limited to operas, ballets, gala shows, concerts, fashion shows, and multimedia performances.

The stages in the building in itself are highly adjustable and easily fixed to any performances in the culturally eventful city of Nanning.

What do you think of the new gmp Guangxi Culture & Art Center?