Albert Einstein’s almost century old theories are still being used for new science discoveries. The latest being the breakthrough in star research using a theory called gravitational lensing. A team of scientists used Einstein's theory to measure the mass of a dwarf star. 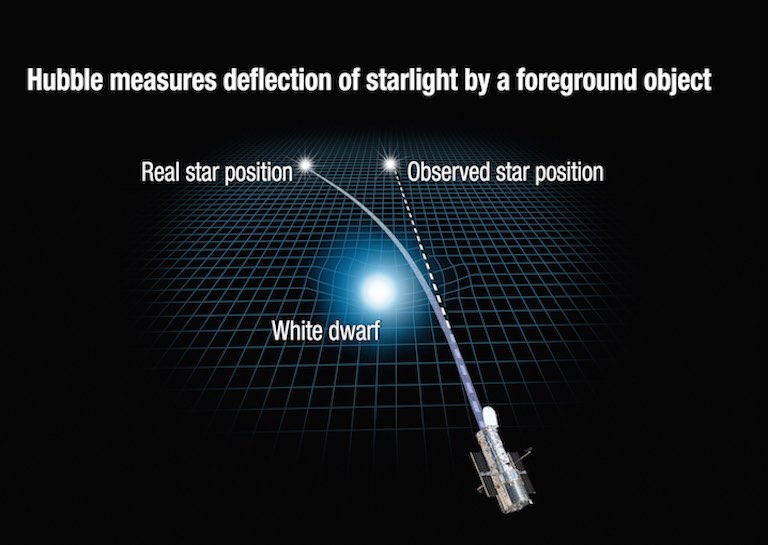 Einstein's friend R.W. Mandl asked him to research and publish on a particular part of Einstein's famous “Theory of Relativity”. He wanted to know more about the way stars should deflect the light that passes by them like a lens would. Einstein theorized that the light from one star would be bent by the gravity of another star. He thought if we could see this happening we could measure the mass of a star using the bent light.

We now call this theory gravitational lensing. When Einstein published his theory paper in Science in 1936, he was quoted as saying, “Of course, there is no hope of observing this phenomenon directly.”

But a team of scientists has used this theory to measure the mass of a white dwarf star using the way it lensed starlight. They have again published their findings in Science closing the gap between prediction and proof 100 years apart. he team of researchers responsible for this breakthrough includes renowned physicist Mario Livio. Previously this type of measurement had been done by using modeling with similar stars.

Finding the star among millions

Finding a star to measure might sound like an easy thing to do. There are over 100 thousand million of them out there! But the team needed a precise arrangement of two stars they could use to prove the theory. This alignment is known as an “asymmetrical Einstein ring.” The ring is formed when a circle of light forms by one star passing in front of another star from our viewing vantage point. An asymmetrical Einstein ring exists when these two stars are just offset. If the team could find this type of ring they knew they would be able to determine the mass of the star in front.

A member of the research team, Kailash Chandra Sahu from the Space Telescope Science Institute used the Hubble Space Telescope to search among more than 5,000 stars for the precise alignment of stars they would need. Finding it was difficult.  Partial rings had been discovered before but never one with the exact asymmetry that they would need to accurately calculate the star's mass. “It was like measuring the motion of a little firefly across the surface of a U.S. quarter and in front of a lightbulb, seen from 1,500 miles away,” Sahu explained at a press conference of the announcement.

But they did find the star, the team selected the white dwarf star Stein 2051B—a stellar object around 20 light-years from Earth. The star has a partner, Stein 2051A, that it circles. The team watched as Stein 2015B moved in front of light sources behind it, and then measured the shift in the light. They used the data and the simple lensing equation to determine the mass of the star. The calculations aligned well with other white dwarf star mass predictions from other methods. The team presented their incredible results at the 230th meeting of the American Astronomical Society in Austin, Texas.

SEE ALSO: A Simplified Introduction to Einstein’s Theory of Relativity