The UK has proposed making it mandatory for new houses to be electric vehicle-friendly.

All new homes in the UK may be required to have electric vehicle charging capabilities if a new proposal is followed through. The Transport Secretary Chris Grayling announced the idea as part of a proposed roadmap for the UK towards achieving their goal of banning fossil fuel vehicles by 2040.

Grayling described the changes saying they will help the UK to have 'one of the most comprehensive support packages for zero-emission vehicles in the world.' “The prize is not just a cleaner and healthier environment but a UK economy fit for the future and the chance to win a substantial slice of a market estimated to be worth up to £7.6 trillion by 2050," he said.

Proliferation of charging stations makes it easier to hit the road

In addition to houses needing to be EV ready, light poles in new subdivisions will also be equipped with chargers. The Automated and Electric Vehicles Bill proposes to set aside $530 million USD to help fund companies producing and installing the necessary hardware for the public charging stations.

In addition to the locally located charging stations, additional charging areas will be installed near freeways and at many traditional petrol stations. One major drawback of electric vehicles at this time is that their recharging time takes significantly longer than traditional gas or petrol refueling.

However, battery technology is advancing quickly and by 2024 the fuelling times between EV and traditional fossil fuel dependent vehicles is expected to be on par.

Electric car company Tesla, lead the way in refueling times but they also expect those times to drop quickly as they continue to develop the next generation of batteries.

The Australian Renewable Energy Agency and Clean Energy Finance Corporation recently conducted a study that suggests up to 90 percent of vehicles on the road Down Under will be electric by 2050. The report says for those levels to be reached increases in technology would need to occur as well as continued government subsidies to attract business and consumer investment. 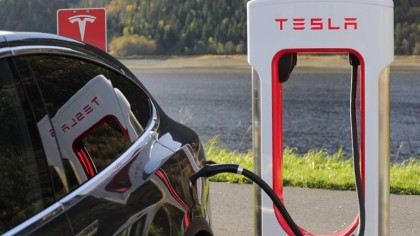 If a country as sparse as Australia is to achieve such impressive targets, then going fully electric should be a much easier achievement for Europe. “This research shows that we can increase the uptake of EVs in a way that benefits drivers as well as the environment. It’s about lowering prices, supporting more models and creating a charging network,” the report says.

“The reality is that the transition to EVs is inevitable. We’re already seeing vehicle makers confirm they will stop producing pure internal combustion engines over the coming years,” it continues.

Both the UK and France have pledged to prohibit the sale of fossil fuel dependent cars by 2040, older more polluting cars are expected to get hit by increased tariffs as they enter dense city areas.