Electron Quantum Metamaterials, the term for a new field has the potential to push the capabilities of nanotechnology even further.

In the past decade, we have been experiencing unprecedented growth in terms of innovations in the area of nanotechnology, with researchers working at lightning speed to produce studies which explain the dozens of applications it can have, as well as the benefits which seem to be in even greater number, from molecular platforms to water filtration systems.

Now, thanks to the work of two physicists, Justin C. W. Song of Nanyang Technological University, Singapore and University of California, Riverside Physics and Astronomy Associate Professor Nathaniel Gabor, a completely new subfield within the emerging technology has been created. Named Electron Quantum Metamaterials, the concept is based on the engineered manipulation of structures to produce materials with completely new properties.

In other words, what we have is a perfect marriage of quantum physics and nanostructures. And yes, it is creating a buzz inside the physics community.

The Concept Behind the Process

Producing electron quantum materials involves the skillful and nuanced layering and angling of two-dimensional layers in such a way that the resulting patterns which are part of the final product promote higher levels of electron and light conduction which would not be possible for the individual components themselves.

Professor Gabor explains how the dynamic process occurs: “It’s a bit like driving past a vineyard and looking out the window at the vineyard rows. Every now and then, you see no rows because you’re looking directly along a row. This is akin to what happens when two atomic layers are stacked on top of each other. At certain angles of twist, everything is energetically allowed. It adds up just right to allow for interesting possibilities of energy transfer.”

Impact on the Industry and Scientific Community

The most exciting aspect of the study is that it offers the potential to manipulate electromagnetic waves and generate energy transfer based on fresh approaches. The research pair assert in their paper that "electronic metamaterials promise far richer categories of behavior than those found in conventional optical metamaterial technologies".

Professor Gabor also highlights how their work, rather than a mere contribution, is laying the groundwork for the creation of a new subarea in quantum p: "Researchers, including in our own labs, were exploring a variety of metamaterials but no one had given the field even a name," he said, adding,  "That was our intent in writing the perspective. We are the first to codify the underlying physics." 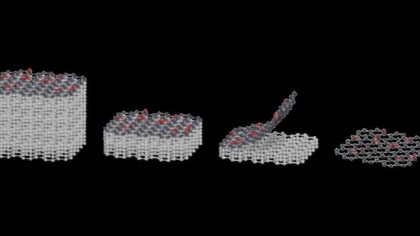 What all of this seems to indicate is that once the terminology is firmly put in place by physicists, a research and development template that can translate into projects within the industry will start to take shape as well.

"We highlight the potential of engineering synthetic periodic arrays with feature sizes below the wavelength of an electron. Such engineering allows the electrons to be manipulated in unusual ways, resulting in a new range of synthetic quantum metamaterials with unconventional responses," Gabor adds.

Details about the study appear in a paper, titled "Electron quantum metamaterials in van der Waals heterostructures", which was published November 5th in the Nature Nanotechnology journal.

Could Every Electron in the Universe Be the Same One?