Elephants' Zombie Genes Could Help Save Them From Cancer

The popular pachyderm could serve as a fascinating study as to how they naturally combat cancer despite their massive size.

Throughout the world -- largely in western countries like the United States -- cancer remains a massive cause of death in populations. In the US alone, over 609,000 people will die due to cancer. But in one particular animal species, cancer doesn't seem to be a problem -- and it's giving researchers hope.

Cancer kills less than 5 percent of captive elephants, most of whom live for roughly 70 years and have 100 times as many potentially cancerous cells as humans. The popular pachyderm could hold the key for researchers wanting to understand why cancer affects humans differently than other mammals.

Researchers from the University of Chicago and the University of Utah set out three years ago to figure out why. The two teams conducted their research separately, and now both are making significant headway in their findings.

The researchers knew that like all other animals, humans have a one copy of a tumor suppresant gene called p53. The gene gives the body a heads up that there's unrepaired DNA damage and causes those damaged cells to die.

Unlike elephants, however, humans have just one set of those genes. Elephants have 20 sets, the researchers discovered. This allows their cells to be more aware of DNA damage and gives them a faster response.

The University of Chicago team published its research in an issue of Cell Reports.

"Genes duplicate all the time," said Vincent Lynch, PhD, assistant professor of human genetics at the University of Chicago and the study's senior author. "Sometimes they make mistakes, producing non-functional versions known as pseudogenes. We often refer to these dismissively as dead genes."

Lynch and his team made a unique discovery while exploring the p53 gene. There's a pseudogene called the leukemia inhibitory factor 6 (LIF6) that came 'back to life' by being activiated by p53. The LIF6 gene creates a protein that attacks a damaged cell's mitochondria and causes it to die faster.

"Hence, zombie," said Lynch. "This dead gene came back to life. When it gets turned on by damaged DNA, it kills that cell, quickly. This is beneficial, because it acts in response to genetic mistakes, errors made when the DNA is being repaired. Getting rid of that cell can prevent a subsequent cancer."

The researchers pointed out the elephants have eight LIF genes, but LIF6 is the only one known to be functional right now.

"We can use the tricks of evolution to try to figure out when this defunct gene became functional again," Lynch said. 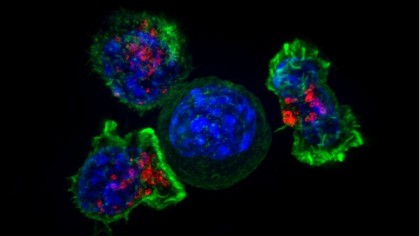 New Drug Can Freeze Cancer Cells to Halt Their Spread

He noted the LIF6 gene emerged when the tiny ancestors to the modern elephant started to get bigger -- roughly 25 to 30 million years ago. This way to suppress cancer might have been an evolutionary boost in growing larger and larger elephants.

But "if you are enormous, such as an elephant or a whale, nothing is going to mess with you," Lynch said.

"Large, long-lived animals must have evolved robust mechanisms to either suppress or eliminate cancerous cells in order to live as long as they do, and reach their adult sizes," said study co-author Juan Manuel Vazquez, a doctoral candidate in the Lynch laboratory.

Elephants and other large animals have considerably more cells in their bodies than smaller mammals. Thus, they've got a higher chance of developing cancerous cells.

The team said the LIF6 zombie gene is certainly worth "the focus of continued studies" to see how -- or even if -- it could be applied to other mammals.