Elon Musk announced via Twitter that he'd be interested in putting forth an idea for shortening the commutes of thousands from downtown Chicago to O'Hare Airport.

Elon Musk is adding one more thing to his jam-packed schedule. He announced via Twitter that he wants his Boring Company to tackle Chicago O'Hare Airport's newest transportation project.

The new system will carry Chicago residents between the crowded streets of downtown out to O'Hare airport in just 20 minutes or less, according to the Chicago Sun Times.

"A taxi ride from downtown to O’Hare could be $60. Ubers run around $40. There’s a lot of room between the price of the CTA or parking to price a service in a way that you can make a lot of revenue," said Deputy Mayor Bob Rivkin in an interview with the Sun Times.

The best thing for Elon Musk to hear at this point? There's no target price tag as of yet. The RFQ does state that taxpayers won't be footing the bill. It will be funded "solely by project-specific revenues" which include fares and advertising. And yes, that means if Musk gets the project, taxpayers still would not pay for the technology. 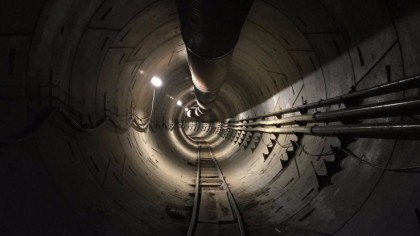 "We think it could be feasible at no cost to the taxpayers and this is the right format to use to find out formally if that is the case. We’ll know as soon as we get responses," Rivkin said.

Musk and other competitors must respond to the RFQ by January 24. From there, city officials will look over the pitches and see who is the "most qualified" for the RFP phase.

However, it seems like Rivkin and other city officials already had their hopes that Musk would put in a pitch.

"The RFQ is agnostic about whether this is a surface or sub-surface system. We hope Elon Musk and either builders of hyper-loops and other innovative technologies will respond," Rivkin said in the Sun Times article.

Chicago Mayor Rahm Emanuel sent a team to meet with Musk at his offices in California to pick his brain on rail technolgy. After hearing more from Musk and his team about the Boring Company, Emanuel brainstormed the potential for a similar system in Chicago.

"The opportunity for Chicago is endless and boundless," Emanuel said in June. "It would be a tremendous investment, job creator and economic engine for the city that would pay dividends for decades ahead... They are very interested. And we’re gonna have `em now out to the city to explore further what we are doing and planning to see whether the tunnel approach is an alternative to the ones we’ve been discussing."

It's important to note that Musk doesn't plan on the Chicago project being a hyperloop. He used Twitter to explain the distinction, noting that a loop would be like a hyperloop but without the vacuum inside the tube.

"Don't need to get rid of air friction for short routes," he tweeted.

A Loop is like a Hyperloop, but without drawing a vacuum inside the tube. Don’t need to get rid of air friction for short routes.

Looks like we'll have to wait until late January at the earliest to see if Musk's next project will take him to Chicago.