From smoking pot with Joe Rogan to losing missions on the Model 3, Elon Musk held nothing back in an interview with CBS News's Lesley Stahl.

Engineering and entrepreneurial figurehead Elon Musk held very little back in one of the most introspective interviews he's given to date. The Tesla, SpaceX, and Boring Company founder sat down with CBS News's Lesley Stahl for a segment on the critically-acclaimed program 60 Minutes.

Musk answered some of the biggest questions even die-hard fans still had about his recent behavior, including his future with Tesla.

Musk infamously tweets at all hours of the day and night. Regardless of when he tweets, his 23.6 million followers normally have something to say in response.

Stahl questioned Musk's Twitter activity, and the CEO called Twitter a place for him to "express" himself.

"Some people use their hair," he said, laughing. "I use-- I use Twitter... Twitter's a war zone. If someone is gonna jump in the warzone, it's like you're in the arena. Let's go!"

Musk's "warzone" mentality online led to controversy in recent months, especially with the Securities and Exchange Commission (SEC). In August, Musk tweeted he wanted to take Tesla private. In the weeks that followed, the SEC disputed Musk's claim and charged the company with securities fraud.

"The only tweets that would have to be say reviewed would be if a tweet had a probability of causing a movement in the stock," he explained. "Yeah, I mean otherwise it's, 'Hello, First Amendment.' Like Freedom of Speech is fundamental."

The SEC slapped Tesla and Musk with respective fees, and Musk agreed to step down as Tesla Chairman. However, it became very clear very quickly that he wasn't happy with the decision.

"But you're abiding by the settlement, aren't you?" Stahl said.

"Because I respect the justice system," Musk said.

"I am somewhat impulsive and don't want to adhere to some CEO template," he said.

Stahl didn't back down from her questions, however. It seemed very few people had let Musk have any sort of break from those questions in the three months since Rogan's podcast. Just last week, NASA officials said Musk would not smoke anything on-air or publically again. If he violated those terms, NASA would impose penalties on SpaceX and restrictions on the company's launches.

However, Musk's answer in this interview seemed to be his final answer on the marijuana subject.

"I do not smoke pot," he told Stahl. "As anyone who watched that podcast can tell I have no idea how to smoke pot, or anything."

On his future with Tesla

Throughout the interview, Musk called 2018 his hardest year to date, both personally and professionally. A large part of that came from production headaches within Tesla.

He explained how he helped Tesla narrowly avoid going under, even with everything else about the Model 3's production going wrong.

Musk's goal had been to produce 5,000 Model 3 units a week. However, automation issues and staffing struggles made that figure almost impossible to sustain.

He responded by building a third massive assembly line in a tent in the Tesla parking lot. According to Musk, the third assembly line took just three weeks to build. They needed a last-minute and unconventional solution to a growing problem. 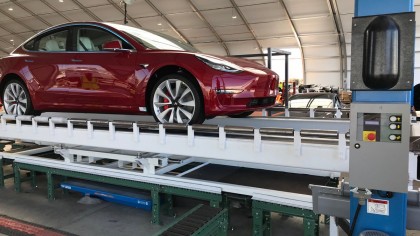 Despite a myriad of staffing complaints and union struggles, Musk made it clear that he appreciated his employees. He told Stahl that however hard he made it for his workers, he wanted to make it significantly harder for himself and bear a larger burden.

"There's been relentless criticism, relentless and outrageous and unfair. Because what actually happened here was an incredible American success story. All these people work their ass off day and night to make it happen. And they believe in the dream," Musk said. "And that's the story that really should be told."