After a Tesla owner thanked the CEO for the filtration system that stopped his daughter's asthma attacks, Musk tweeted about the filters' many other positive attributes.

Tesla’s Model S and X air filters are so advanced that the company has described them as a “bioweapon defense mode.” The company claims that the impressive filters are “hundreds of times more efficient than standard automotive filters.”

The filters came back into focus this week when a user tweeted that they prevented his daughter from suffering asthma attacks. The post was retweeted by Musk himself.

@elonmusk Thank you & @Tesla for #Bioweapon Defence Mode. Our daughter’s life depended on it. No more asthma attacks in the car. pic.twitter.com/WKXyA0Hxow

The CEO then went on to describe more of the system's unique features such as an acid gas filter, an alkaline gas filter, and a carbon monoxide detector. Musk explained that this makes the filters too big to fit in the Model 3.

Model S & X also have an acid gas filter, an alkaline gas filter & a carbon monoxide detector that autoswitches car to recirc mode. We should prob tell people about this more. Filters are giant, so too big to fit in Model 3.

His followers shared their own positive experiences with the filtration system. Many called for the system to be installed in public transportation.

My son has bad allergies and this Spring when pollen was crazy high and his eyes were watering and nose stuffy, I turned on Bioweapon Defense Mode. Within 2 minutes he was feeling better and 5 minutes in he was back to normal. Thank you!!

To test the filters, Tesla placed a Model X in a bubble with extreme levels of pollution of "1,000 µg/m3 of PM2.5 vs. the EPA's "good" air quality index limit of 12 µg/m3." The study reported that in less than two minutes, the filtration system had brought pollution levels down so much they were undetectable. 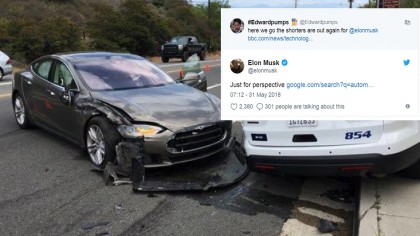 More impressively, in the following minutes, the system began to work its magic on the air outside the car reducing PM2.5 levels by 40%. This led Tesla to claim that "you can literally survive a military grade bio-attack by sitting in your car."

The Tesla blog describing the tests was shared by Musk on his Twitter account with the words "Some details on the Tesla air filtration system." That was followed by a tweet referring to the fact that the system filters "bacteria, viruses, spores, pollen & particulate of almost any kind."

The CEO also shared a tweet about a user's positive experience with Autopilot and a map on Tesla Superchargers. No one has ever accused Musk of not supporting his work!