Elon Musk was shocked after he heard details of the power crisis in Australia.

In July of this year, Elon Musk began building the world’s largest lithium-ion battery in Australia in a bid to secure South Australia’s power supply after a state-wide blackout.

Despite his best intentions, Musk had no idea about the political turmoil he had entered by offering his sustainable services. In a recent interview with Australia’s 60 Minutes, the SpaceX CEO seemed perplexed regarding the conflict and bickering between states and the Commonwealth over Australia’s future energy sources and power costs.

“I didn’t realize there was this big battle going on,” he told the program.

Despite his surprise, Musk did admit that his company received criticism from the Federal Government regarding his battery construction and plans for Australia. According to News.com.au, Treasurer Scott Morrison company Tesla’s project to Australian tourist attractions like the Big Prawn and the Big Banana, amusement parks in the country with folly themes. 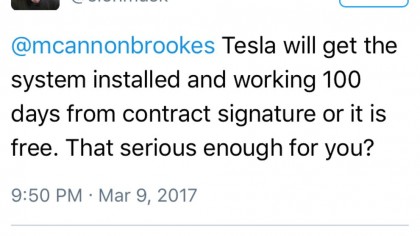 “We get that (criticism) all the time,” Mr. Musk said. “It can be a little disheartening.”

Australian power costs have increased significantly, as the country is in the grips of a power crisis. Something Musk doesn’t quite understand as he believes Australia is a perfect candidate for sustainable energy.

The program also interviewed Australian billionaire and co-founder of Silicon Valley startup Atlassian Mike Cannon-Brookes, who initially challenged Musk on Twitter to build a 100MW battery in 100 days after Tesla boasted it could solve Australia’s power problem. Musk responded with an offer to Cannon-Brookes that if he couldn’t do it in 100 days, it would be free.

“If people make big claims like that I’d like to check if they’re real,” Cannon-Brookes told Hayes.

After the public challenge was accepted, the Atlassian founder realized that many Australians were behind this idea.

“Australia has so many national resources, electricity should be very cheap.” - Elon Musk

“I got multiple unsolicited offers for tens of millions; we added it up to about 100 million dollars in offers that came in. It was inspiring as an Australian to see people wanting to solve this problem in a real and meaningful way, I think they’re just sick of the politics on all sides,” said Cannon-Brookes.

Power poverty was another term Elon Musk was unaware of but is a significant problem Australians are facing.

When Musk found out that Australians were going without food to save on electricity bills, he became visibly emotional, claiming that he and his company, “will work harder.”

The lithium-ion battery he’s building in South Australia is a 129MWh battery, which is paired with a wind farm. It has the capacity to power thousands of homes in case of a blackout.

“Upon completion by December 2017, this system will be the largest lithium-ion battery storage project in the world and will provide enough power for more than 30,000 homes, approximately equal to the amount of homes that lost power during the blackout period,” Tesla stated in a blog post.

Via: News.com.au, The Guardian