Elon Musk Gets Permission to Start Digging for NYC-DC Hyperloop

Elon Musk’s Boring Company team has received a building permit from the D.C. government to allow excavation work at the capital’s NoMa neighborhood.

Elon Musk’s Boring Company may soon be getting you from New York to Washington D.C. in 29 minutes, with the entrepreneur having attained written permission to start digging in D.C.

Elon Musk, the founder and CEO of SpaceX, and Tesla has turned his attention to the problem of traffic and is attempting to solve it with his Hyperloop Project.

Musk tweeted in July 2017 that he had the green light to build the New York to D.C. route, and has now attained the paperwork to prove it. 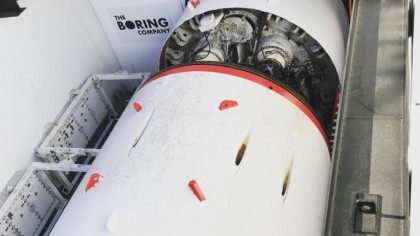 “The Boring Company team has received an early, and vague, building permit from the D.C. government that will allow some preparatory and excavation work at the fenced-off parking lot at 53 New York Avenue NE beside a McDonald’s and amid the construction cranes of Washington’s booming NoMa neighborhood.” the Washington Post reported. A spokesperson for the company also said that "a New York Avenue location, if constructed, could become a station."

This approval comes a few months after Musk received the go-ahead to begin digging in Maryland, which is designed to be one of the stops on the new northeastern route. The state of Maryland gave Musk the permission to start digging a 10.3-mile tunnel beneath the Baltimore-Washington Parkway in October, marking the first part of the New York to D.C. route.

“This thing is real. It’s exciting to see,” Maryland Transportation Secretary Pete Rahn said at the time. “The word ‘transformational’ may be overused, but this is a technology that leapfrogs any technology that is out there today. And it’s going to be here.”

Obviously, the man who conceptualized the Hyperloop has never had the patience for sitting in gridlock.

In December 2016, Elon Musk expressed his frustration and his solution for it with traffic on Twitter. “Traffic is driving me nuts. Am going to build a tunnel boring machine and just start digging…” he wrote on December 17 of last year.

Digging tunnels holds the prospect of adding additional lanes to urban areas that cannot easily accommodate more lanes above ground. But with Musk’s track record such as the Hyperloop project in other areas, experts think it is likely his solution will succeed.

The tunnels for the Boring Company will begin “across from my desk at SpaceX,” which is located near “Crenshaw and the 105 Freeway,” about five minutes from LAX, Musk said earlier this year.

Musk also talked about the concerns relating to earthquakes. He said, "Earthquakes tend to have the biggest effect on the surface, like waves on water. That's why LA can have a (lame, but getting better) subway."

Here's What Elon Musk Has to Say About Nuclear Weapons