Elon Musk recently dropped a look at SpaceX's spacesuit to be worn by passengers of the autonomous Crew Dragon.

Here's what the future of space travel looks like according to Elon Musk and the SpaceX crew. The CEO recently shared a photo of the company's in-house suit design. The Instagram post is the second from Musk detailing exactly what future passengers of the Crew Dragon can expect to wear.

Astronaut spacesuit next to Crew Dragon

Let's take a look at the suit starting from the bottom and working upward.

First, the boots. The boots starkly contrast from traditional NASA boots. They look nothing like what astronaut Peggy Whitson would've worn on a spacewalk. The boots look eerily similar to Hunter rain boots with a very lightweight look to them. Our guess: the shoes aren't made for out-of-craft activity. They're probably used for mobility within the capsule or while transferring vehicles (i.e. from Crew Dragon to International Space Station).

Moving upward, there's padding on the knees that seems very flexible. There are also similar padded bits around the shoulders, elbows, and along the sides. And then, of course, there's the upper half of the suit, previously featured in an earlier post from Musk.

In the initial post, Musk assured his followers that the suit is "not a mockup."

"Already tested to double vacuum pressure," he tweeted. "Was incredibly hard to balance esthetics [sic] and function. Easy to do either separately."

While it's tempting to focus on the suit, several SpaceX superfans have noted that this image is also one of the best looks of the Crew Dragon craft itself. The Crew Dragon is expected to be the premier next generation spacecraft designed to carry astronauts -- and potentially passengers -- into space.

Crew Dragon will be completely autonomous, SpaceX said. The company won a $2.6 billion contract from NASA to build a craft specifically to take astronauts to the ISS. It will be largely controlled by SpaceX mission control in Hawthorne, California, with separate controls and monitor onboard the ship for astronauts. SpaceX plans on launching a demo of the Crew Dragon in February 2018. The first test of the craft with crew members will happen in June 2018, according to the NASA timetable. 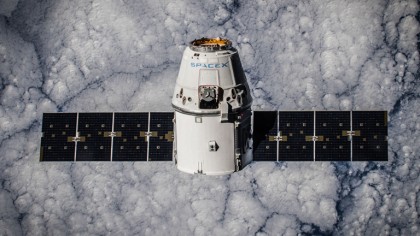 Just like with its space suit, SpaceX said its design balances both functionality and comfort.

"Crew Dragon was designed to be an enjoyable ride. With four windows, passengers can take in views of Earth, the Moon, and the wider Solar System right from their seats, which are made from the highest-grade carbon fiber and Alcantara cloth," the company noted on its website.

In his initial post showcasing the space helmet, Musk promised more images to come. Maybe we'll get detail images about unique features of the suit? We'll just have to keep checking his Twitter and Instagram feeds until he drops even more information.