Elon Musk has said he will help if he can in the rescue mission of a junior soccer team.

Elon Musk has offered to help rescue the Junior soccer team stuck in a cave in Thailand. Musk was asked on Twitter if he would pitch into the rescue effort to which Musk replied that he was ‘...happy to help if there is a way to do so”

I suspect that the Thai govt has this under control, but I’m happy to help if there is a way to do so

Exactly how Musk could help the international rescue effort is unclear. On June 23, 12 members of a junior soccer team and their coach visited Tham Luang Cave a popular tourist destination in Thailand.

However, once they were inside rising water blocked their exit out and they were stuck. The group is now the focus of an international rescue effort.

It is still unclear how the boys will be rescued. As the monsoon season approaches it is urgent that the boys are rescued soon or else the rising water will fill the cave entirely.

The rescue effort involves resources from both the UK, the USA and locally. The boys are healthy despite being in a weakened state due to lack of food and sunlight.

One option is to teach the boys to dive and swim out of the cave, but experts worry that this is too ambitious considering some of the children don’t even know how to swim. “If it rains and the water volume increases, we have to calculate, how much time do we have? How many hours, how many days?” Narongsak Osottanakorn, the commander of the search and rescue operation, said.

“If the water increases, we will go back to where we were.” Both Thai and international audiences are glued to media outlets as information about the boys' health and rescue effort is released.

Local farmers in the area have paused in their work to help the Thai Navy bring water and supplies closer to the cave entrance. Some farmers have even had their fields flooded by water that is being pumped out of the cave.

Musk's Boring Company could be the answer

Musk owns The Boring Company, a drilling company that intents on reducing the cost of fast underground tunneling. There has not yet been a suggestion his technology could assist. 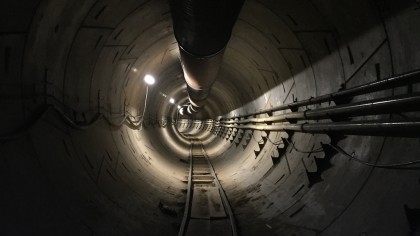 As both Musk and his companies have been under fire for a range of controversial issues over the last few months, Musk has tried to reconnect with fans via Twitter.

It has been noted by online observers that in April and May Musk quadrupled his tweeting. Quartz noted that 80% of all his Twitter interactions in May were replies rather than original posts.

Musk has used his Twitter account to begin all sorts of projects like solving the energy crisis in Australia to taking suggestions from Tesla owners about new features. He is also an active Instagram user, using the social media platform to share images and videos of important SpaceX, Tesla, and the Boring Company related milestones.

Elon Musk Presents: The New $50 'Cyberwhistle' Was Sold Out in Hours