The Boring Company's massive tunnel projects, which most notably include the landmark Hyperloop and relatively newer O'Hare Airport-Downtown Chicago plan, are progressing at full speed, as the company's funding to support the projects have continued to roll in this year.

Still, however, in these times, the value of providing a good teaser--in the form of a short image or video (sometimes leaked) that offers a mini-update or a quick peek into the progress of a project--are essential. Boring Company CEO Elon Musk shared a short video on Twitter which shows someone manipulating one of the company's Tunnel Boring Machine's (TBM) using only an Xbox Controller.

The company is currently overseeing four projects, all at very different stages of progress, with the most recent being the Dugout Loop, which was formally announced less than a month ago. Godot, the name of the first boring machine, has been given the task of creating a 4.3km tunnel below Interstate 405, a highly congested artery that runs through southern California.

The challenge of generating funding opportunities

The stunt appears, as do many of Musk's actions, to be a dynamic and fresh approach to create or maintain interest in his projects and ideas. In a world of branding and calculated public relations strategies, Musk prefers to buck all trends, again and again, and find clever and inventive ways to engage his audiences. 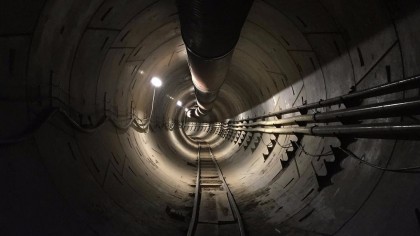 This is a crucially important task, for one important reason: the companies he oversees cover a staggering range of sectors, from the space sciences to electric cars. As such, the people with whom he interacts in order to support, fund and execute his work are equally diverse.

The singular quality that has earned him the most respect and appreciation from his peers has been his honesty and transparency. In other words, he is aware that feasibility and execution concerns linger, but chooses to focus on progress and improvement instead of responding to critics.

In a recent interview with television and radio personality Joe Rogan, Musk was candid in sharing his personal philosophy behind the Hyperloop project:

"So in desperation, we are going to build a tunnel, and maybe that tunnel will be successful. And maybe it won't. I'm not trying to convince you it's going to work. Or anyone," he added with punctuation.

The reality is that all funds for these projects are independently raised, a testimony to Musk's fighting spirits. The vision of this company, as well as Tesla's which began with his sincere desire to improve the transportation realities for Californians, have expanded into projects which, when completed, will have a huge impact in the United States.