Tesla CEO Elon Musk puts so much on Twitter and Instagram that it's hard to differentiate the truth from the jokes. (Except, apparently, his snarky April Fools post on Twitter getting back at critics for saying Tesla's financial situation was less than ideal.)

However, his most recent post appears to be a fun surprise for Tesla owners. Musk recently showed off some of the new Easter Eggs in his latest Instagram post. 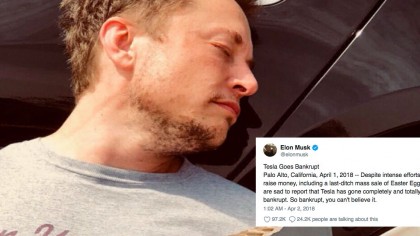 To access the Easter Eggs, drivers simply need to tap on the console, pick their feature, and enjoy. While there aren't a ton of details available about what each egg does, there are a few things one could guess. For example, there's a cowbell labeled "MORE COWBELL" -- a reference to a Saturday Night Live comedy sketch from 2000 which starred Christopher Walken. (This could also fulfill a promise that there would be "more cowbell soon.")

Tap the Tesla logo on the center screen to access most discovered Easter eggs. More coming …

There's also what appears to be a warp speed overlay. One can only hope that it sends a Tesla owner's console into "hyperdrive." And it seems like the Model S is getting the same "007" access code feature which will pull up James Bond's signature Lotus.

This isn't Musk's first round up of Easter Eggs. In Tesla cars with the Autopilot, drivers can press the Autopilot key four times to drive down the Mario Kart rainbow road.

There's also the ability to transform the vehicle into the Mars rover. Simply hold the Tesla logo atop the screen and enter "mars" as the activation code.

Keeping Drivers' Eyes on the Road

While the Easter Eggs are always fun, there's a growing concern that the humans behind the wheels of autonomous vehicles might get too distracted by the tech. Even on Musk's latest post, fans pointed out the irony of an autonomous car maker encouraging people behind the wheel of his cars to look away from the road.

Most recently, the National Transportation Safety Board said it was "unhappy" with Tesla after a Model X's Autopilot was in use in the death of Apple Engineer Walter Huang.

Last week, Tesla announced it was moving its Autopilot controls to the steering wheel for its latest Model 3 update.