The entrepreneur known for his bold tweets released another surprising announcement. But if the past predicts the future, there may be a mecha on the way.

Elon Musk says a lot of things on Twitter and not all of them are serious. The intrepid entrepreneur and CEO of SpaceX has been known to use the social media medium to do everything from take on flat-earthers to share his firms' future plans. 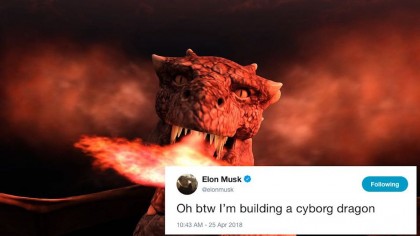 One thing is for sure, whatever the man posts is bound to get attention. And although he is known for his sense of humor regarding his tweets, like the time he said Tesla was broke on April Fools day, the modern genius is also known for making the impossible come true.

One such instance was when Musk tweeted he was building a cyborg dragon. The extreme statement saw many followers scramble to find out what he meant while others were quick to assume the innovator was referring to none other than SpaceX's revolutionary dragon capsule, a real-life dragon indeed.

Time for a mecha?

So when Musk tweeted yesterday that it was time to create a mecha, a giant fighting anime robot prominent in science fiction, people took notice. Could the restless inventor really have his heart set on building one such impressive human-controlled robot?

It is time to create a mecha

An hour before that, Musk announced via another tweet that he loved Japanese animated romantic drama "Your name" along with a trailer of the show. Could the film inspire Musk's next great project?

After all, if Musk can venture into "not a flamethrowers" and surfboards, who is to say what is next? On a more serious note, the CEO and founder also shared a more profound musing that went rather unnoticed in the mecha frenzy.

Reducing the risk of climate change

The eco-conscious leader posted a rather profound sentiment regarding his vision for environmentally friendly electric vehicles, one that he has expressed on several occasions before. In a surprisingly eloquent tweet, Musk explained that Tesla was a venture dedicated to thwarting the impending disasters of climate change.

Tesla exists to help reduce risk of catastrophic climate change, which affects all species on Earth. Even if your faith in humanity is faltering, this is worth caring about. Support makes a difference. Thank you.

He also retweeted an article from the Rolling stones about the dangers of climate-related rising sea levels. Musk has often shown his dedication to the environment, most notably by quitting his role on the presidential councils after President Donald Trump said the US would exit the Paris Agreement.

He has also in the past called out Australia for their energy consumption and has famously described our addiction to fossil fuels as “the dumbest experiment in human history.” When it comes to energy and climate change, it seems Elon Musk never jokes! And with new reports saying there is less than 12 years to act on the issue, we can see why.

Elon Musk Says Electric Jets May Be 3-4 Years Away