Elon Musk has hosted a party at the site of 129-MWh battery project in South Australia. He announced that the battery system was already almost halfway complete.

Elon Musk is feeling confident he will meet the 100-day deadline for the world’s largest battery pack set to be installed in Australia. He told Australian media the battery system was already almost halfway complete just days after the 100-day clock officially started. Tesla hosted a party to celebrate the approval for the ambitious power project by the Australian Energy Market Operator. Musk hosted the party at the construction site of the 129-MWh battery.

Once completed the battery will store power generated at the French company’s Neon's Hornsdale wind farm located 230 kilometers north of Adelaide. Politicians, local landowners and Tesla customers toasted Musk as he shared project update details with the crowd. "To have that [construction] done in two months … you can't remodel your kitchen in that period of time," Musk joked. "This serves as a great example to the rest of the world of what can be done." 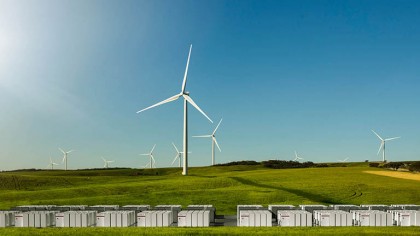 The project was initiated by the South Australian government as a way to ease pressure on the existing power grid which has experienced damaging blackouts during extreme weather. Premier Jay Weatherill was at the party and noted that it has been a year since the last devastating statewide blackout. "That was not a good day," Mr. Weatherill said. "Tonight we are here celebrating the progress that's been made.There were lots of people that were making jokes about South Australia and making fun of our leadership in renewable energy. Well, today they're laughing out of the other side of their face."

The battery bank will be made up of the existing Tesla commercial product, the Powerpack. The batteries are being manufactured in the Tesla Gigafactory in Nevada. Neon global COO Romain Desrousseaux described the project, saying, "The system is a big battery, a battery big enough to power 50,000 houses — the biggest in the world."

The 100-day tight deadline for the project became part of the agreement for the contract after Musk tweeted at South Australian Premier, Jay Weatherill saying he could fix their energy problems in 100 days or it would be free. The clock officially started on Friday when the project received its approval from the Australian Energy Market Operator. The South Australian government wants the battery up and running by December 1. They are also installing 250 megawatts of temporary diesel generators, to help address expected energy supply shortages expected during the summer period as energy use increases across the country.

Musk has estimated it will cost over $32 million to build the battery. In order to meet the 100-day deadline, Tesla switched its battery cell manufacturers from Panasonic to Samsung. Musk has also suggested that this project could be just the start of a long relationship between Australia and his company. Musk floated the idea of powering Australia with 1,890 square kilometers of solar panels supported by seven square kilometers of batteries. "It's not just talk. It's reality," he said.