Musk's Boring Co. was featured in a recent Instagram post from the CEO. The update comes a few days after he announced the name for his second boring machine.

In his latest Instagram post, Elon Musk showed his millions of followers that his Boring Co. is anything but boring. The Boring Co. CEO is digging a tunnel under Hawthorne, California near the SpaceX headquarters. After months of construction, Musk finally shared the first real look into the boring tunnel itself.

The Boring Company tunnel under LA

This is the first real look Musk has given the public. Sure, there were the videos of pods whizzing through the tunnels during testing, but it's hard to get a good visual from a camera whizzing by at over 100 mph. The picture clearly showcases the tunnel's paneled walls and tracks. There's also the upper conduit, cabling, and lighting systems.

In previous talks, Musk referred to the Boring Company as a "hobby" rather than a full-blown company venture. If Musk's definition of "hobby" includes redefining public transportation, we'd love for him to get even more hobbies.

The Boring process has been an interesting one to chronicle. It began last December as a single tweet allowing Musk to vent about the infamous and atrocious Los Angeles traffic. And, because it's Elon Musk, the spark of ideas from Twitter have slowly become a reality. In January of this year, he tweeted that he was ready to dig. He quickly address skeptics both on Twitter and in real life.

“First route will go roughly parallel to the 405 from LAX to [Highway] 101, with on/offramps every mile or so,” he wrote online. “…Electric skates carrying vehicles and people pods on the main artery travel at up to 150mph, and the skates switch to side tunnels to exit and enter. This is a big difference compared to subways that stop at every stop, whether you’re getting off or not.”

In July, Musk responded to requests for expansions of the Boring Co.'s tunnel networks.

For sure. First set of tunnels are to alleviate greater LA urban congestion. Will start NY-DC in parallel. Then prob LA-SF and a TX loop.

On Oct. 20, Musk and the Boring Co. got permission to start digging in Maryland. The new tunnel would be 10.3 miles (nearly 17 km) in length and run the course between the Baltimore-Washington Parkway. It could eventually serve as a starting point for Musk's Washington to New York path with other stops at Baltimore and Philadelphia. 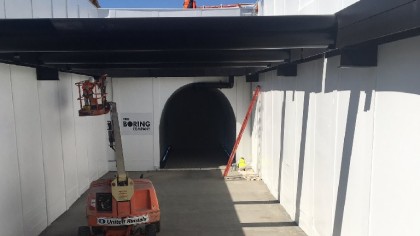 "This thing is real. It’s exciting to see," Maryland Transportation Secretary Pete Rahn said to the LA Times. "The word ‘transformational’ may be overused, but this is a technology that leapfrogs any technology that is out there today. And it’s going to be here."

The announcement came shortly after Musk said the Boring Co. acquired its second boring machine. His first machine was dubbed Godot in reference to Samuel Beckett's Waiting for Godot. The second machine was named 'Line-Storm' and takes its name from a Robert Frost poem.

Two boring machines, expanding projects, and a nearly completed tunnel -- it seems like Musk's Boring Co. will be far from boring. But really, which of Musk's ideas could actually be labeled as "boring"?