The long-awaited launch of the Falcon Heavy will occur next month, and Elon Musk's photos show it primed and ready to go.

SpaceX CEO Elon Musk tweeted out new photos of SpaceX's long-awaited Falcon Heavy Rocket. The Falcon Heavy, which has endured several delays, appears ready for launch next month should everything stay on schedule.

Current plans are for the Falcon Heavy to launch from Cape Canaveral in Florida in January 2018.

Falcon Heavy at the Cape pic.twitter.com/hizfDVsU7X

Musk has tweeted quite a bit of odd promises regarding the Falcon Heavy. Earlier in December, Musk tweeted that he was going to send his Tesla Roadster as the payload -- all while playing David Bowie's "Space Oddity" on full blast -- and ship the whole rocket off to Mars. 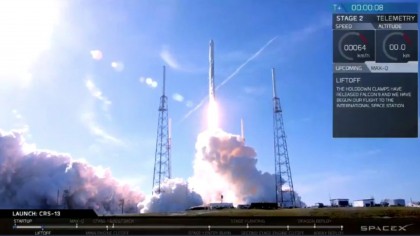 While the pictures certainly seem impressive, Musk continues to warn the public not to get their hopes up too much.

"There's a real good chance that it does not make it to orbit. I hope it makes it far enough away from the pad that it does not cause pad damage," Musk said in at the International Space Station's R&D Conference in July. "I would consider even that a win, to be honest."

Musk also noted that developing such a powerful and large-scale rocket became "way, way more difficult" than the company had originally planned.

"Falcon Heavy requires the simultaneous ignition of 27 orbit-class engines," Musk said. "There's a lot that can go wrong there."

And earlier this month, Musk reiterated the "this might not work" mentality on Twitter, saying it's "guaranteed to be exciting, one way or another."

There were more pictures than just the ones via Twitter that showcased how ready the Falcon Heavy seems.

The SpaceX Instagram account featured a post of the company's 400th Merlin 1D engine -- the latest rocket that is responsible for propelling a Falcon 9 into space.

The SpaceX team recently completed production on our 400th Merlin 1D engine—the latest iteration of SpaceX’s rocket engine that powers Falcon 9 to space. To date, SpaceX’s Merlin engines have been fired over 440 times on orbital missions and over 5,600 times in test and launch. This represents over 396,000 seconds of engine firing, enough to launch ~8 million pounds—or the equivalent of 7 International Space Stations—into orbit.

These Merlin engines are nearly identical to the 27 strapped to the bottom of the Falcon Heavy. Of the three main boosters, the Falcon Heavy will use cores flown from previous Falcon 9 boosters. And if the central core itself looks familiar, it should. It's a modified version of a Falcon 9. The goal is for the Falcon Heavy to launch and deliver payloads as massive as 63,800 kg (approximately 140,654 lbs) into space.