The innovator went to work on a potential rescue pod and submarine that could help rescue the students trapped in a Thai cave.

Just days after Elon Musk sent members of the Boring Company and SpaceX teams to Thailand to assist with rescuing 12 boys and their coach stuck in a cave, the CEO recently posted his 'kid-sized submarine' tasked with evacuating the kids.

This video shows the rest of the team in action during the pod's testing:

The world has watched and waited for days as rescue teams attempted to get the boys out of a cave in Chiang Rai, Thailand. The team became stuck in a Tham Luang Nang Non cave on June 23, but the location wasn't discovered until July 2.

Once the first four boys made it out of the cave, people were unsure whether the government would use Musk's ideas to get them out. While the announcement was a promising one, Musk continued to build his submarine, and construction and testing is still underway.

Musk wanted to create a new rescue vehicle that he described as "double-layer Kevlar pressure pods with Teflon coating to slip by rocks."

The CEO tweeted this on July 7:

With this tweet further describing the rescue vehicle he thinks could save the remaining children and their coach:

Timing remains critical for both Musk's team of engineers working rapidly on this project, as they want to reach the remaining people in time. Chiang Rai's Governor Narongsak Osotthanakorn announced that no further action would be taken until the Thailand rescue team ensured everyone that all conditions were stable for a second wave of evacuations. 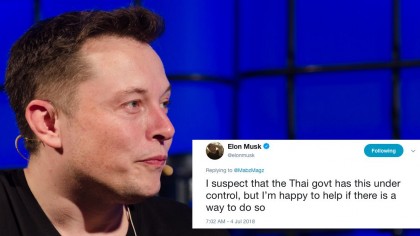 Even if everyone makes it out in time before Musk and his crew could get the submarine to Thailand, Musk seemed confident this project could lead to other endeavors. The CEO tweeted "With some mods, this could also work as an escape pod in space."

Interesting Engineering will continue following this story and will update it as more information becomes available.