The short video on Twitter shows off a test of the new technology Musk hopes will cut costs on SpaceX’s Starship.

In a video posted this weekend, Elon Musk showed off what looks to be SpaceX’s new stainless steel heat shield technology, which Musk hopes will accelerate production of SpaceX’s Starship and Super Heavy rocket systems.

The short video Elon Musk tweeted out shows SpaceX engineers blasting a stainless steel heat shield with flamethrowers, which he says reached 1100 degrees Celsius (2000 degrees Fahrenheit). Though too low to represent actual reentry temperatures of the windward facing side of a reentering vehicle or rocket, this appears to only be the first in a series of tests to be carried out on the new heat shield.

The video demonstrates Musk’s commitment to the new ship redesign he announced last year for the Starship passenger vehicle and the Super Heavy rocket.

Rather than use carbon fiber for the fuselage, Musk announced that the two components would be make out of stainless steel and feature a new technology in its heat shield that would accelerate the schedule for developing the new systems.

The new plan for SpaceX’s new rocket and passenger ship calls for a fully stainless steel fuselage. This has generated considerable attention since something like this hasn’t been tried since the earliest days of the US space program’s Atlas system.

Speaking to Popular Mechanics last year, Musk explained his rationale. Carbon fiber, the lightweight, durable material that most modern ship and airplane designs incorporate to make them lighter, is enormously expensive, costing SpaceX $135/kg. According to must, 35% of that material is waste. Because carbon fiber is also very tough to cut and work with, so a lot of it cannot be used, so SpaceX’s real cost for carbon fiber is closer to $200/kg. 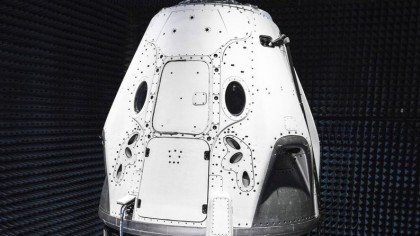 The tradeoff, Musk acknowledges, is that stainless steel is heavier than carbon fiber, but he hurries to add that stainless steel is lighter than all the other metals they could use, its easier to work with, and when it has a high chrome-nickel content, actually gets stronger in a cryogenic environment, whereas other metals become brittle. Musk sees this as an acceptable compromise.

Having made the switch to stainless steel gave Musk the opportunity to try a different kind of heat shield that Starship could use upon reentry.

Most heat shields are made of special ceramic tiles that are bonded to the windward side of the fuselage. Musk has decided to go with something different called transpiration cooling.

Since stainless steel can remain sound at temperatures up to 1500 degrees Fahrenheit—about five times more than carbon fiber or aluminum—, this new heat shield would be more than capable of handling reentry, in theory.

To show that Musk’s idea can work will require further tests at higher temperatures, so we can expect more videos from Musk and SpaceX in the future.