Elon Musk released impressive videos of a broad view of the Boring Company making its way through the other end of its first enormous tunnel in what is truly a landmark moment.

The Boring Company has been hard at work on its LA/Hawthorne tunnel, and earlier today the company reported new progress in the massive transportation project.

The buildup has been monumental, with CEO Elon Musk orchestrating a series of teasers and updates, from offering free rides through the tunnel space to sharing videos of the tunnel digging machine Godot in action.

The projected completion date for the project, which includes the endpoint of O’Leary Station, was December 10th, which means that everything is running smoothly. In fact, the company is planning a dramatic unveiling, and Musk is convinced that the company will meet its firm deadline for the 4.2m wide, 1.6km long tunnel.

He tweeted out a series of videos, confidently congratulating the company " on completing the LA/Hawthorne tunnel!" adding, "Cutting edge technology!":

Though it seems the digging in itself was not creating a disturbance, some Los Angeles residents who live in and around the project area in Hawthorne have charged that they were not informed prior to the construction beginning, which even slowed the progress of the project thanks to a lawsuit being filed earlier this year. 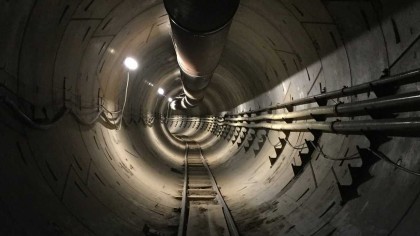 Despite this, the local government believes in the project enough to improve an important environmental waiver in August, which was an important step for the company. To quiet the critics and continue to establish trust and confidence in the local community, Musk has continued to share posts throughout the year which reflect his belief in the greater good of the project.

In one of the hearings from September in which the public and local government asked about the speed of the digging, Boring Company Senior Director of Facilities and Construction Brett Horton, explained the urgency behind the landmark project:

“We are trying to revolutionize transportation,” he said, adding, “We don’t want to get bogged down, and we want to show potential investors, other cities, the city of Hawthorne, our employees, that we can succeed, we will succeed, and we won’t slow down, and we won’t take any approach that doesn’t get us to our goal as quickly as possible.”

Although the company has three other ambitious projects in the works, this one has attracted the most attention, and if successfully executed, will help secure even more funding for future projects. Because of the bold and innovative aspects of Musk's work, it will understandably attract strong views from many sides of the debate, including stakeholders as well as non-stakeholders.

Since the company broke ground in 2017, it has been Musk's fearless and defiant belief in the success of his projects, and their transformative potential in the United States' transportation infrastructure, which has kept the momentum going more than anything else. With each development, he becomes better and better at turning opposition into positive momentum.

As the countdown to December 10th continues, Interesting Engineering will continue to update this story as more information unfolds.