By  Loukia Papadopoulos
May 28, 2018
StarmanGame

Last February Elon Musk sent a cherry-red Tesla Roadster with a dummy pilot wearing a spacesuit in the driver's seat to space. The convertible caused quite an uproar as it launched and orbited around the Earth.

The event was live-streamed giving the audience a unique look at the car's view of planet Earth. Musk named the dummy Starman in a nod to David Bowie.

Now, this same vehicle is finding itself the star of an online game devised by car blog Autowise. It is called the Starman Game and it features the red convertible trying to navigate its way past three stages, Earth, the moon and Mars, while fighting of satellites, metal nuts, spaceships and asteroids.

For the grand finale, the Roadster has to laser blast a giant floating Jeff Bezos head, likely in reference to the competitor's founding of aerospace manufacturer and spaceflight services company Blue Origin. The game features an old-fashioned aesthetic seen in 1980s video games.

Meanwhile, the background music is an electronic version of David Bowie's Starman, a well-suited dedication to Musk’s naming of the Roadster pilot dummy. For the time being, the game needs to be played on a desktop or laptop as it requires the use of a keyboard's arrow keys but a video posted on YouTube shows all stages.

Musk's Tesla Roadster was launched into orbit on February 6, 2018, at a speed of 18,000 mph. The convertible was on board SpaceX’s Falcon Heavy rocket and was first shot into the Van Allen belt.

The rocket was then fired a second time to send the car out of Earth’s orbit. The Falcon Heavy overshot its trajectory and sent the Roadster on its way to the asteroid belt.

It is assumed that the convertible could potentially cruise the solar system for a very long time. Although there is always the risk of the car being damaged by space debris or radiation, experts so far predict a smooth trajectory.

Dr. Seth Shostak, senior astronomer at the SETI Institute in Mountain View, California, told NBC News MACH in an email that even in the asteroid belt anything the car could be exposed to "will only very slowly degrade the Roadster and its rider." "Indeed, this car is surely destined to rack up billions of miles before disaster hits — if it does," Shostak added. 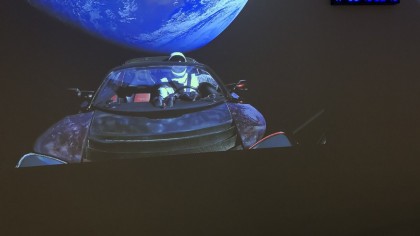 In addition, with space not having any oxygen and water, the car is safe from rusting. In a news conference after the launch, Musk said the car could be in space for "maybe millions or billions of years."

"Maybe [it will be] discovered by an alien race, thinking, 'What were these guys doing? Did they worship this car? Why do they have a little car in the car?'" Musk said. "That will really confuse them." We can only wonder what they would think if they saw the online game!