The Tesla Roadster was sent on a voyage toward Mars orbit with a dummy in the driver's seat. New calculations show Tesla has 6 percent chance of hitting Earth in next million years.

SpaceX’s Tesla Roadster was launched into a Mars-crossing orbit on February 6 fascinating everyone on Earth. The Tesla’s trajectory is set and is not expected to undergo any further course changes.

Hanno Rein and his colleagues at the University of Toronto in Canada have calculated the future trajectory of the car as far as possible.

Astronomers have been trying to determine the fate of near-Earth asteroids, comets, and even the planets themselves for a long time. This is not easy to do because the system is hugely complex. The trajectories of these objects are influenced by the gravitational attraction of many other objects. The positions of these other objects have to be exactly known.

Coming within Moon's distance in 2091

The precise parameters of the Tesla’s initial trajectory may have a huge impact on its ultimate fate. A small change in these parameters can make a big difference in the result. This makes it impossible to say exactly where the Tesla will be over a period of time which is longer than a few hundred years. 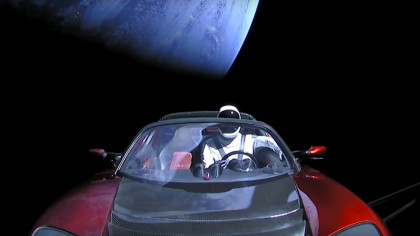 But astronomers have run lots of simulations, each with a slightly different set of starting conditions, to work out the various probable scenarios. This also shows the probability of the Tesla smashing into Earth, Mars, Venus, or anything else in the long term.

Rein and his colleagues performed several hundred simulations of the Tesla’s future trajectory around the sun over the next million years. In each one, they added a tiny random variation to the initial velocity of the vehicle to figure out where it would end up.

They found out first, the Tesla would come within the moon’s distance of Earth in 2091. It is for sure that Tesla does not collide with Earth within the next 1,000 years. Over the next million years, the number of probable collisions with Earth or other planets is small.

The vehicle's likely lifespan is estimated to be a few tens of millions of years. The ultimate fate of the spacecraft carrying the Tesla is still unknown. Much will depend on the orbital dynamics of the solar system itself. Predicting what will happen to the car will require a larger number of simulations over much longer time scales.

In another development, astronomers Gianluca Masi and Michael Schwartz were also able to photograph the Tesla Roadster and Starman. The image was assembled when Masi, an astrophysicist, founder and director of the Virtual Telescope Project in Italy and Schwartz, the founder and president of Tenagra Observatories, in southern Arizona, took the average of 10 separate, 300-second exposures they got from a telescope at Tenagra Observatories.

"Its apparent brightness is extremely low, 40 million times fainter than the Polaris star," Masi told LiveScience in an email. The team members located the Roadster by relying on data from their own observations in addition to NASA's Jet Propulsion Laboratory and the Minor Planet Center.

Once they figured out where to look for the car, they took a handful of images and averaged them to get a good signal-to-noise ratio.