A jet traveling to the US from Dubai was quarantined and 11 of its passengers were taken to the hospital. The cause of the sickness has not yet been disclosed.

An Emirates airline Airbus A380 jet was quarantined at New York's John F. Kennedy International Airport due to passengers on board falling mysteriously ill. Bloomberg reported Emirates Flight 203 landed in New York around 9:10 a.m. ET where it was sent to a staging area set up by Port Authority and Centers for Disease Control and Prevention (CDC) officials.

Emirates released a Twitter statement confirming the event and revealing that about 10 of the superjumbo jet's passengers had fallen ill. USA Today then further reported that passengers were finally let go from quarantine by 10:45 a.m. ET.

Statement: Emirates can confirm that about 10 passengers on #EK203 from Dubai to New York were taken ill. On arrival, as a precaution, they were attended to by local health authorities. All others will disembark shortly. The safety & care of our customers is our first priority.

Passenger Larry Coben, who live-tweeted much of the ordeal, confirmed he was on his way home around 11:03 a.m. ET. Coben added that other passengers were also released.

Happy to report that I am through customs and on my way home. Others as well

The mysterious illness that may have led to the panic has not yet been disclosed and no news has surfaced on whether it has even been diagnosed. However, Coben later further tweeted that passport and customs authorities wore masks when greeting the passengers whereas the CDC staff did not.

Interesting factoid: Passport and Customs folks wore masks in empty hall when we came through, CDC people did not. For those of you who have requested contact details, I will try to return your DM’s sometime today.

This could indicate that the center did not warrant that there was much risk of contagion. Coben did say that passengers' temperatures were taken and that they were asked to fill out CDC prevention forms.

Deplaning and having temperature taken pic.twitter.com/MVxWqJPLTe

According to the organization's site, the risk of contagion on an airplane is low. However, the center still follows strict protocols to further protect the health of passengers and the public at large. 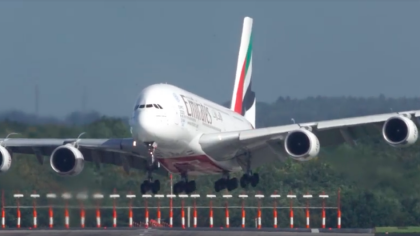 Watch An Emirates A380 Land In A Ferocious Crosswind

Although no official announcements have been made by the CDC, Inverse did manage to get an emailed statement from the organization's spokesperson Benjamin Haynes. "CDC is aware of an Emirates flight from Dubai that arrived this morning at JFK. Approximately 100 passengers, including some crew on the flight, complained of illness including cough and some with fever," read the email.

Haynes further reported CDC public health officers were working with local authorities to examine passengers and take all necessary healthcare measures. "Passengers who are not ill will be allowed to continue with their travel plans, and if necessary will be followed up with by health officials," added the representative.

*Update 1: Vox has reported that the CDC released a statement at 3:20 p.m. ET announcing that 11 people were taken to the hospital while the rest were let go. News outlets also revealed that US rapper Vanilla Ice had been on the flight and had tweeted about his experience.

So I just landed from Dubai and now there is like tons of ambulances and fire trucks and police all over the place pic.twitter.com/i9QLh6WyJW

Furthermore, in a media statement tweet, Emirates confirmed that all passengers had been disembarked and screened. The airline explained that three passengers and seven crew were sent to the hospital.

Media Statement #2: Emirates can confirm that all passengers have disembarked from flight #EK203. All passengers were screened by local health authorities prior to disembarkation. 3 passengers & 7 crew were transferred to the hospital for further medical care and evaluation. 1/4

*Update 2: CNN has reported that a "CDC official familiar with the situation" said the center was looking into the possibility that the cause for the airplane disturbance may have been respiratory illnesses such as influenza or Middle East Respiratory Syndrome.

IE will continue to report as the story unravels.