Emotional Atlas Shows Where Each Emotion Affects the Body

It is well known that emotions affect human body and have some influence over human mood and physiology (like small differences in heart rate and body temperature). In other cases strong emotions may cause serious health problems like hearth attacks. 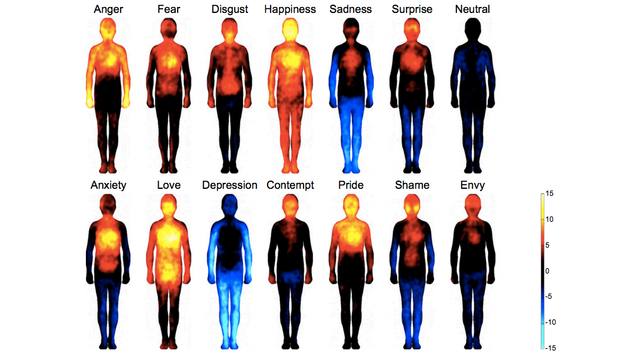 A group of Finnish scientists have created a map that reveals which body part is affected when an emotion flows through the human brain. The study included 773 participants with Finnish and Taiwanese roots who showed very similar results, despite the cultural and language differences.
Every participant had to explain what feelings are caused in him (or her) by emotionally charged materials. Those materials were movies, words, stories and expressions. After seeing them the participant had to highlight on a human silhouettes the area affected of a concrete emotion. The participant also had to define the power of the emotion by using colors, as the strongest emotion is colored in bright yellow, not so strong but intense emotion is red. And finally the weakest, dulling emotion is colored in blue.

According to the scientists, the results and conclusions of their study could "reflect a purely conceptual association between semantic knowledge of language-based stereotypes", and they also state that there is a “cultural universality” in the way our emotions affect our bodies.