Colin Furze has done it again, and this time, he has joined the X-Men by turning himself into a real-life Ice Man. Armed with liquid nitrogen, this plumber turned inventor wondered if making a liquid nitrogen gun that could freeze things on contact would be possible. He spent quite a bit of time trying to figure out how to make holding tanks for the super-cooled liquid, and mostly figuring out ways not to freeze himself. Through a lot of work, Furze has done it, and his palm-mounted liquid nitrogen blaster is incredible. Check it out below.

This isn't the first time that Colin has turned himself into an X-Man, in fact, he has built suits to turn into Wolverine, Magneto, and Pyro. In order to freeze things on contact, Colin first experimented with compressed CO2, but soon found that that wasn't quite cold enough. So he went with the coldest fluid he could purchase, -320˚F liquid nitrogen. After building a dual tank reservoir on his back, one for liquid nitrogen, and another for compressed gas, the tricky part was figuring out how to pump the liquid to his wrist.

The problem wasn't that he couldn't get the liquid out, but rather that it froze every material of tubing that he could find. Eventually, he discovered that metal motorcycle brake line did the trick, and he kept moving forward, determined to become one of the X-Men. The firing mechanism of this palm mounted ice shooter uses a tilt sensor to engage, so all Colin has to do is raise his hand and freeze every opponent. 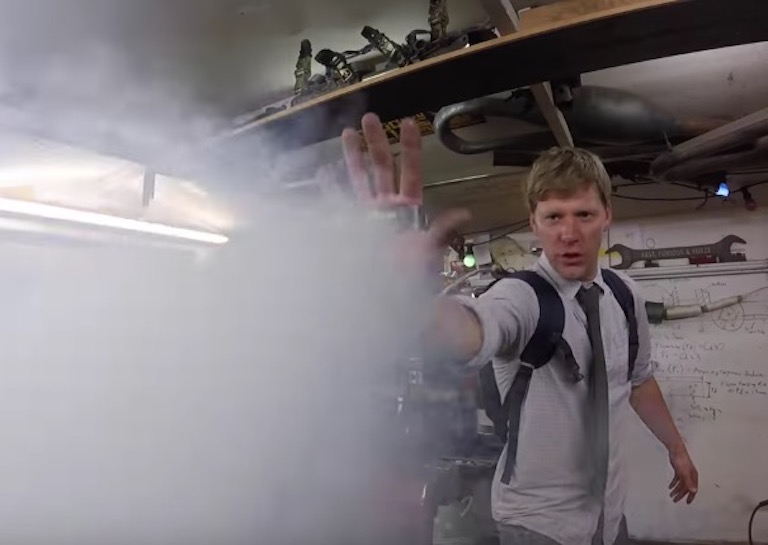 Seeing science fiction turned into reality is one of the coolest things ever, and with some innovative engineering, you can turn into a mutant and team up with the X-Men. Colin has built some incredible projects in the past, and as his following grows, he will only go on to do even more incredible things. Stay tuned to IE for more about this insane engineer.