When researchers at the University of Cambridge began looking into the sketches on the side of Leonardo da Vinci's notebooks, they stumbled across something incredible. The sketches to the side demonstrate falling objects attached to a rope, or a block sliding across a surface, all demonstrating that da Vinci well understood friction as early as 1493. Previously, the sketches were declared irrelevant by an art scholar, but researchers have now identified them as pivotal in regards to da Vinci's discovery of friction.

The study from Ian Hutchings, Professor of Manufacturing Engineering at the University of Cambridge and a Fellow of St John’s College, is the first to chronologically detail da Vinci's discovery of friction and show how he continued to apply his knowledge to many of his mechanical inventions down the road. da Vinci has been known to have discovered friction, but no one really knew how, or even when he stumbled across this essential physical property.

"Professor Hutchings has discovered that Leonardo’s first statement of the laws of friction is in a tiny notebook measuring just 92 mm x 63 mm. The book, which dates from 1493 and is now held in the Victoria and Albert Museum in London, contains a statement scribbled quickly in Leonardo’s characteristic “mirror writing” from right to left." ~ University of Cambridge

This discovery now gives the world some backstory to da Vinci's progression of understanding of friction, as well as the extent of knowledge he had on the subject. 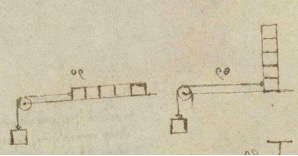 “The sketches and text show Leonardo understood the fundamentals of friction in 1493. He knew that the force of friction acting between two sliding surfaces is proportional to the load pressing the surfaces together and that friction is independent of the apparent area of contact between the two surfaces. These are the ‘laws of friction’ that we nowadays usually credit to a French scientist, Guillaume Amontons, working two hundred years later.” ~ Professor Hutchings

Hutchings believes that the sketches in da Vinci's notebook were likely representations of experiments he conducted himself. It was also noted that Leonardo likely used lubricants and oils to study the interaction of surfaces and their effects on friction.

Further findings were published by the University of Cambridge here and here.

Hidden Figure No Longer: The Contributions of Gladys West