The Engineering Behind the Russian KA-52 Attack Helicopter

The Russian KA-52 "Alligator" helicopter was designed in the 1990s for the Russian army, and it is currently still in use.  Designing an attack helicopter for some of the world's top militaries is a little different process than designing a commercial vehicle. The alligator is a 2 seat variant to the Kamov KA-50 "Black Shark" designed in the 1980s. Designed to destroy enemy tanks and armored vehicles, this helicopter has the highest thrust to weight ratio in its class, powered by 2 VK 2500 engines each producing upwards of 2,400 HP. Check out some more of the features of this scout/attack helicopter below.

The power cell connects to a co-axial rotor which eliminates the need for a tail rotor, creating increased safety for occupants and flight capabilities. Another impressive feature of this bird is that the flight ceiling stretches to a maximum of 5,500 meters, outflying literally every other attack helicopter in the world.

An onboard radar allows the KA-52 to recognize and identify ground targets without the need for the pilots to provide visual confirmation. One particularly interesting feature of this warbird is that in the event of  a crash landing, the pilots can eject safely. In order to begin this process, the rotors are detached allowing a clearing for the ejection seats to safely navigate. 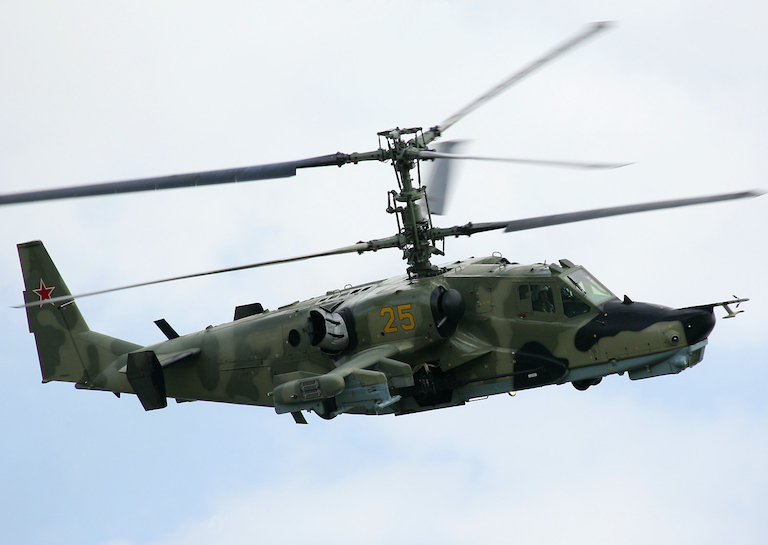 Military technology like this does come into question by critics often as to why the world needs to expend so many resources to create machines that only have the sole purpose of hurting others. Regardless of your views on war and military technology, wars often drive technological advancements at speeds otherwise unseen. These advancements filter down into the civilian world, many times bettering society. What do you think? Is this an amazing machine or an unnecessary helicopter?