Humans are headed for Mars, and students partaking in the University Rover Challenge are developing the next great rover to accompany astronauts on the Red Planet.

It is the curiosity of the unknown which drives humanity to explore uncharted frontiers. The unrest of ignorance forces explorers and curious minds alike to progress humanity through new discoveries. A great deal of the earth has been explored, and while there remain some unknowns, many believe the next giant leap for mankind is the exploration of Mars.

Humans are destined for Mars, and when astronauts make the first interplanetary jump, they will be undoubtedly accompanied by a Mars rover. It will mark an unprecedented journey imperative to the continuity of the human race - and preparations are already underway. But at the moment, the technology to get humans to Mars is still not fully developed; hence why the University Rover Challenge (URC) was created.

The URC challenges the inquisitive minds of university students to design, build, and test a Mars rover over a series of tasks and objectives on the difficult Martian-like terrain located in a desert within Utah, USA. Since the competition’s debut in 2006, the Mars Society - the host of the event - has hosted annual competitions every summer since 2007.

“The international robotics competition for college students, which is part of the Mars Society’s Rover Challenge Series, featured an elite field of teams vying to build the world’s best student-designed Mars rover. A record 95 teams from 12 countries took part in URC2018. Following a rigorous two-stage down-selection process 36 teams were invited to the field competition at MDRS. 35 teams from ten countries arrived with their rovers ready for the exciting challenges in the Utah desert.” tells URC.

Now, more than a decade on, dozens of teams from around the world take part in the competition every year to build the world’s best Mars Rover. Hundreds of students and come together annually in the deserts of Utah within the United States. This year, 35 teams and more than 500 students from ten countries participated in the URC.

In its twelfth year of Mars Rover competitions, the URC tasked competitors with the same four tasks seen before in previous years. Teams must complete a series of tasks which are timed and scored based on performance. However, every year the tasks are made more difficult as teams master different challenges. The four tasks in which each rover must complete includes a science mission, delivery mission, an equipment servicing mission, and an autonomous travel mission.

One of the key missions of Mars exploration is to examine the Martian land for potential life forms which may already exist and explore other regions to support the lives of a future colony. Completing the task requires each rover to take drilled samples of soil and examine its composition to determine if it hosted life, and to find evidence of flowing water.

The next mission the rovers undertake in the URC includes the delivery mission. Rovers must traverse a series of challenging terrain with increasing difficulty while performing various tasks.

The 2018 tasks of the delivery mission included delivering a toolbox and water bottle to an astronaut, as well as picking up and delivering a specific rock chosen by the judges. While requiring minimal levels of dexterity, the mission is instead to test the performance of rovers over a variety of rugged terrain.

The equipment servicing mission in the URC requires meticulous precision to perform a series of delivery tasks over difficult terrain. Each year, the tasks to be performed in the servicing mission see the most change as they are updated to match the skill level and push the envelope of the competition.

Previous tasks in 2017 required rovers to tow a wagon loaded with an empty fuel canister where they had to fill the fuel tank, swap the regulator on the gas cylinders, and start the generator by pressing a small button.

Other tasks of the servicing leg of the challenge have included inflating an artificial habitat with air as well as cleaning solar panels. The task is specifically designed to require dexterous manipulation of robotic arms and perform tasks easily carried out by humans, but are challenging to accomplish with robots.

After successfully completing the first portions of the challenge, teams are faced with the most difficult challenge of the competition - the autonomous travel mission. Rovers are to be autonomously guided over difficult terrain, increasing with difficulty as the challenge progresses.

The most difficult parts of the track are hidden from the view of the team, and any human intervention is heavily penalized. The course winds through steep terrain, over rock gardens, and through thick and sometimes wet sand. The robots must solely navigate to a destination based loosely off of geographical descriptions, not GPS coordinates.

It is an important task designed to incorporate autonomicity - an imperative feature if the robot is to survive moments where it is out of tele-operational range.

Each task is then scored and added - the team with the highest score wins.

“The PCz Rover Team capped their victory with a dramatic performance late Saturday on the Extreme Retrieval and Delivery Task, earning the only perfect score of the competition in that task. During this task, rovers were required to navigate across the arduous terrain surrounding MDRS to retrieve tools and deliver them to simulated astronauts in the field. The last objective of the task required teams to ascend a steep and narrow ridgeline, bordered by harrowing drops on either side, to deliver a tool to the final astronaut. This objective had already sent three previous teams either rolling or sliding off the side of the ridgeline to varying degrees of rover damage. PCz’s unique frame began to slip as it neared the astronaut, but came to a rest with just inches to spare, allowing them to deploy the required tool and securing their championship performance.” Reported URC.

Featured below is a look at the top three performing rovers at the University Rover competition.

The PCz Rover Team entered the URC with an all-new design. Their new rover maintains a simplistic appearance, but what it lacks in looks it makes up in performance. Their rover boosts a rocker-bogie design, a robot containing two sets of wheels secured between a rocker. Extending out from the rocker is a bogie - a single wheel which stretches out and attaches through a pivot point to the rocker.

The design is simple, yet offers extreme mobility for rovers to navigate over difficult terrain. The team received an impressive score of 374.20, with a perfect score in the extreme retrieval and delivery task.

Next on the podium falling 35 points behind the PCz Rover Team was the Mars Rover Design team based out of Missouri University of Science and technology. Their rover, deemed the ATLAS, features a far more complex suspension system. A unique suspension design developed by the team’s 60+ members, called the Mantis, was designed and fabricated entirely by the team.

The system features a rocker in the center which attaches to three outstretched wheels. All three wheels can be individually controlled, while a differential bar enables each side to also operate independently and improve mobility over difficult terrain.

Coming up third in the competition was team Impuls based out of Kielce University of Technology. Made up of a core group of just 14 members, the team fell over 15 points behind the Mars Rover Design Team, however, still put on an outstanding performance. Instead of a system based around a rocker, bogie, or both, the team instead opted for an interesting 12-wheeled system.

At each corner of the robot sits a set of three wheels fastened together. While not as complex as the previous designs of the Mars Rover Design Team and the PCz Rover team, the wheel and suspension system was still able to navigate through the difficult terrain. However, their simple approach to their suspension caused the team to gain only 50 points in the extreme retrieval and delivery task - a far cry from PCz Rover Team’s perfect score of 100. But where the robot lacked in mobility, it made up for in dexterity. The team focused on the robotic arm, which paid off with a third-place finish.

Last year was arguably the most impressive performance ever put on by university students from across the world. 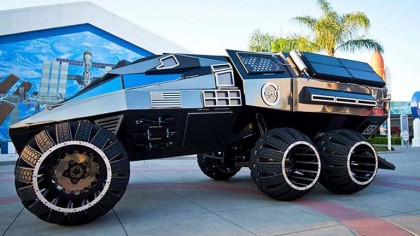 While only featuring three of the robots here, many other robots also put on a phenomenal and exciting performance. This year, even more teams are expected to join the rapidly growing Mars Rover competition.

The University Rover Challenge is the world's premier robotics competition for college students. For the last decade, students have been meeting in the desert of Southern Utah to pit their robots in a friendly competition to determine which is the best. The competition is growing in popularity, and you could be the next URC champion of 2019.

As reported by URC:

“If you're a college student interested in robotics and Mars exploration, the only question left is...

Are you up for the Challenge?!”

Water is Mysteriously Disappearing From the Surface of Mars