Engineering Technology Trends to Watch in 2019

From automation to 5G to cyber risk. Here are the technology trends that engineers have to watch closely in 2019.

The year 2019 is going to be more about the evolution of the existing technologies than about innovation. For years now we have been talking about all what is going to happen in 2020. Now, less than a year away, we can say that the future is here to stay. Major engineering technology trends are going to be visible throughout 2019. 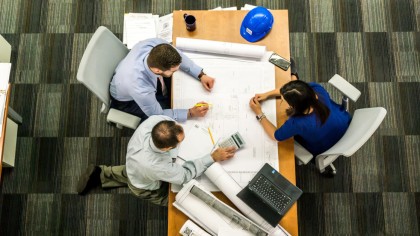 Engineers Should Master Soft Skills for a Successful Career

Rapid change is going to characterize the technological trends impacting engineering and manufacturing in 2019. At the same time, the industry is going to see a continuous effort and challenge to meet the sector's skills shortage.

In order to face change, engineers must upgrade their existing skills and learn some other new ones that will help them collaborate with the new technologies that engineers are going to adopt in their job.

The rise of disruptive technologies such as Augmented Reality (AR), Virtual Reality (VR), Artificial Intelligence (AI), and Additive Manufacturing (AM) --also called 3D-printing-- are set to dominate the industry in the upcoming months.

Engineers must be at the forefront of innovation and emerging technologies as well as the new technologies that have become important tools for engineers and designers.

The rise of the factory of the future with more automation and robotics incorporated to the manufacturing process brings an integrated systems approach. Factory automation opens exciting possibilities as well as challenges in the industrial environment.

"Technological revolution ... that is blurring the lines between the physical, digital, and biological spheres." - Professor Klaus Schwab, Founder of the World Economic Forum and author of The Fourth Industrial Revolution

The Fourth Industrial Revolution, a term coined by Professor Klaus Schwab and introduced in Davos, Switzerland at the World Economic Forum in 2016, brings digital, physical, and biological systems together.

Some believe that new and emerging technologies such as Artificial Intelligence (AI) will eleiminate some jobs. Yet, AI is going to create a huge demand for new skills that many engineers don't have today.

The Fourth Industrial Revolution is going to bring all sorts of change at a speed, scale, and force unlike anything you have seen before. Preparedness becomes crucial.

5G connectivity is going to make possible the Vision 2020 we have been talking about for the past years.

Engineers have to keep an eye on 5G network developments and 5G adoption around the wrold. 5G connectivity is what is going to power everything that the different engineering branches are going to be working with starting in 2019 and onward.

From the manufacturing assembly line to how to illuminate smart cities to city infrastructure and machine-to-machine (M2M) connectivity, the 5G network is going to change the way we work, live, and interact with people, cities, and machines.

By 2009, we had already been talking about the Internet of Things (IoT) for at least a few years. It took well over 10 years for the IoT to reach today's maturity.

Before, it was not possible to connect everything to the Internet because the networks were not ready. Now, thanks to 5G connectivity all the technologies that depend on it are going to advance at a much faster speed.

According to analyst firm Gartner, 20.4 billion connected things are going to be in use worldwide by 2020.

The Internet of Things (IoT), sometimes referred to as the Internet of Everything (IoE), demands fast communication between sensors in order to work properly. Industrial engineers, for example must also watch closely the security of manufacturing applications such as sensors that monitor constantly the status of the assembly line.

This means that no matter the field, every engineer needs to watch for security alerts. But we are going to discuss this in more detail later.

All in all, engineering for IoT is one of the trends all engineers must definitely watch in 2019.

In 2019, Smart City design is going to take a longer view into the future. The first step into building toward the future is through building a smart infrastructure that can support all Smart City applications today and tomorrow.

Otherwise, the city has to dig up the same streets over and over every year in order to add infrastructure for the new applications. This represents an unnecessary waste of resources, time, and tax money.

Doing things in the right way from the beginning is the smart thing to do, so existing applications such as surveillance cameras (CCTV), traffic sensors, smart lighting, smart parking, and others can be easily updated at the same time others are incorporated into the infrastructure.

Smart city planning and design is a space engineers much watch closely this year.

Automation in the Fourth Industrial Revolution is going to take the central stage in smart manufacturing and digital transformation. In order to remain relevant, manufacturers need to embrace change, automation, and offer training to their traditional workforce in order to fill the skills gap existing today.

A recent report found that in the next three years automation is going to take over manufacturing. IoT and AI are going to make manufacturing more agile and smarter. Engineers are going to be tasked to supervise the machines with the help of smart devices.

Traditional workforces are going to see change due to automation, yet they need to develop skills to execute the digital transformation that automation brings to the manufacturing sector. Forward thinking leadership is going to be in high demand in this sector with humans driving the change that it is needed for success.

Human-to-Machine (H2M) is the emerging collaboration between humans and machines.

The adoption of Augmented Reality (AR), Virtual Reality (VR), and Mixed Reality (MR) technologies in the manufacturing sector is closing the gap between the digital and the real world.

Automotive engineering designers are going to experience a positive boost thanks to the help of new advances in AR, AR, and MR and more practical applications of the R+ technology (AR, AR, MR) powered by 5G.

This means that engineers are going to work with more powerful tools assisting them in their job. In 2019, Augmented Reality is going to grow exponentially and is going to help engineering designers and many others work and collaborate across multiple geographies.

Last but not least, one of the most important spaces security engineers must watch this year --if not the most important-- is advancements in cybersecurity research and how to stay ahead of the game before vulnerabilities turn into serious breaches.

Ensuring that networks and security systems are updated has to always be a priority. Designing systems to deal with disruptions such as natural disasters or malicious cyber attacks must be done with vision into the future and updated often.

Cybersecurity engineers must be alert and carry out frequent threat analysis and risk assessment at an early stage during product development ensuring that security is a strong feature of every product and device.

With the global broad adoption of the Internet of Things (IoT) taking a front seat this year, analysts have anticipated that IoT is going to create new security risks for enterprises and also for consumers. By using tools such as Artificial Intelligence (AI) and Machine Learning (ML) enterprises can sooner predict and protect from cyber attacks.