Engineering the Stage: What New Technologies Are Reshaping Performances?

These technologies are helping storytellers sculpt cohesive storylines and narratives that hold the power to transform an audience's experience.

American actor Brian Stokes Mitchell once described the power of theatre stating, “ ...it has the power to transform an audience, an individual, or en masse, to transform them and give them an epiphany experience that changes their life, opens their hearts and their minds and the way they think”.

Before blockbuster Marvel films or award-winning indies, the stage was the place of tragedy and comedy, bringing together people of all walks of life to bear witness to important cultural moments. When you think about it, concerts, plays, operas, and musicals and the ways that they have been presented to audiences have remained unchanged for thousands of years, until recently.

Like many other creative fields that parallel stage performances, technology has birthed a new era for stage designers, directors, actors, and musical performers, changing your experience for the better.

Still true to its core, technology has pushed the world of stage design to new frontiers, creating performances that transport audiences into narratives across time and history, creating unforgettable moments.

The new engineered stage creates experiences that “changes lives… transforming an audience, an individual, or en masse”. So, let’s begin.

Immersion Is the Name of the Game

Set designers have access to more immersion tools than ever. However, the mission for each director is still the same; to create cohesive storylines and narratives that engage or even challenge audiences. The latest and greatest in stage technology is useless unless a designer fully understands this.

Nevertheless, tools like virtual reality, augmented reality, video production, and artificial intelligence have created a myriad of possibilities for the stage. From top musical performances to the opera, these tools are there to enhance the experience rather than detract from it.

Set design rockstars like Es Devlin and Joseph Bennett have been masters of immersion, sculpting experiences for the world’s top concerts, fashion houses, operas, and galleries. Today you are not only going to learn about the technology used on the stage, but you will take a peek at some of the greatest set designs in recent years.

Two major technologies have made their way to stage design: projection mapping, and holographic technology. Each of these tools has elevated the stage to create performances that have influenced culture in more ways than you think.

Starting off with projection mapping, this tool allows designers to turn just about any object or shape on a set into a display surface for video media or images. The beauty of video projection is that it can adapt to just about any sort of setting.

Project mapping is not a novelty. Some designers use it to blend the movement of performers creating the illusion that the stage itself is evolving, that the stage is alive. Animations and images from projection mapping allow for each performance, no matter the venue, to be unique.

1927’s production of the Golem in the United Kingdom, used projection mapping for the entire backdrop, creating an evolving environment for the actors and audience.

While Es Devlin’s set design for Carmen, an opera by Georges Bizet, utilized projection mapping to convey the progression, emotional heights, and conflict of the story. Like a house of cards frozen in time as it falls, the card values are projected and changed on the set’s background.

Multimedia: A Story Within a Story

Pre-recorded media has become a major staple of the modern stage. Musicians and set designers enjoy using these tools as they can be another powerful way to convey emotions, major themes, and ideas without the performers saying anything.

Almost cinematographic in nature, pre-recorded media is very popular for musicians across the globe. Top artists like Beyonce and Adele use pre-recorded media to give audiences further insight into their music, to empower themselves, to present lyrics, or simply to just display amazing visuals.

While the Watch the Throne tour brought this to new heights with their massive multimedia cubes.

Even on a smaller scale orchestrating the appropriate timing for lighting, sound, and movement can be a daunting task. Though error is not completely out of the picture when using automation,  human error is far more common and can be costly to the immersiveness of a performance.

Pre-programmed lighting and sound allow performances on the stage to continue without breaking the immersion for the audience. Sound effects, proper follow-spots, musical cues are all now done via a digital system. In the coming years, artificial intelligence could make this even more exciting.

Holographic performances have slowly taken the stage by storm. From novelty performance to thematic art projects, the holograms are slowly making their way onto the stage. However, the idea of creating a hologram is not something completely new.

In fact, a “hologram” is not the same type of technology that you may covet from your favorite Star Wars film. Based off of a 1999 patent, the parlor trick uses an angled piece of glass placed on the stage to reflect a projector image onto a screen that looks invisible to the audience.

Though the method is not completely “innovative” it hasn’t stopped AC concepts from bringing back your favorites like Tupac and Michael Jackson from the dead for one last performance.

For the legendary fashion designer, Alexander McQueen, Joseph Bennett suspended a holographic Kate Moss into a prism to create one of the most memorable fashion shows in recent history.

There is a new actor on the stage. Aside from helping with automation, projection mapping, and even sound design, AI is taking center stage becoming the actual performers. Robotic sculptures move on their own to various sounds, adapting their movements to the audience's reactions and stares. 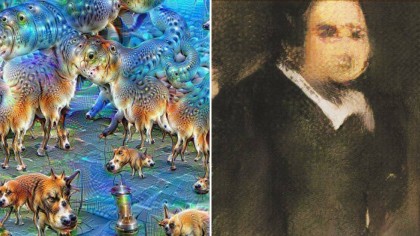 Will AI-Art Supplant Humans as the Artists of the Future?

Ruairi Glynn’s Performative Ecologies installation is an excellent example of this, conveying a conversation between visitor and performance, person and machine.

In another history-making performance, production designer  Joseph Bennett used two robotic arms during an Alexander McQueen fashion show to put on a production that inspired people for years, a prequel for what is to come.

Expect to see many more AI performers in the near future.