Nerf guns are one of the most fun toys out there, whether you are playing target practice or having a battle with your friends. Engineers have been known to heavily modify Nerf guns to make them more powerful or maybe just a little dangerous. However, one former NASA engineer turned Youtuber has taken things to the next level and built the world's largest Nerf gun that can launch projectiles over 100 meters!

This trio of engineers built this insane replica Nerf gun using a compressed air system built into the perfectly scaled-up Nerf shell. Using a typical 3,000 psi compressed CO2 tank you can buy for paintball guns, the team rigged it up to a regulator valve triggered by, well, the trigger. Pushing the trigger forward fills the firing tank, and pulling the trigger back, fires the giant Nerf bullet projectile. Each launch uses 80 psi of compressed air, which is plenty to send the pool noodle and plunger darts flying.

The internal mechanism of this giant Nerf gun is actually pretty simple, and you can get a decent idea of what you need to design to make everything work in the video. Having a giant Nerf gun seems a little impractical, but when it looks this cool, it is definitely something you need. This gigantic gun is the perfect combination of awesome engineering and insane fun. 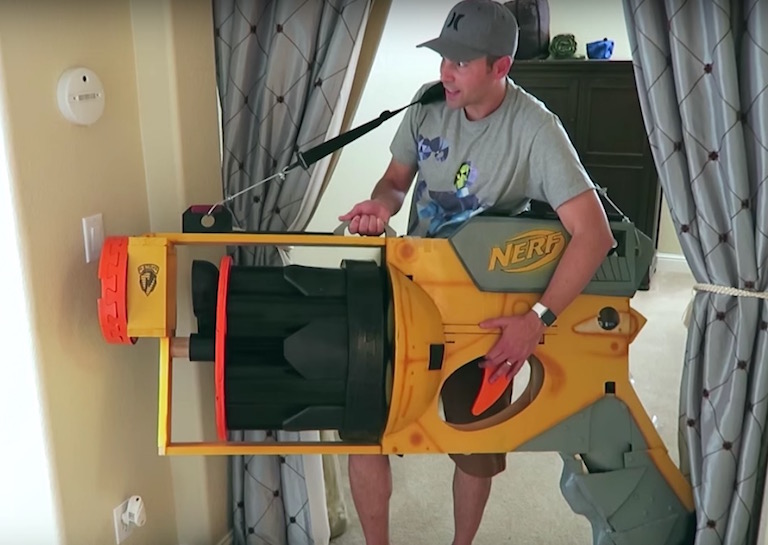 So, now that you know it's possible, gather up all of your friends and build an arsenal of giant Nerf guns for the most intense, yet safe, battle ever!