Among the innovations on display at this year’s American Chemical Society (ACS) National Meeting was a printer that combines 3D printing techniques.

3D printing is a technology that seems to possess immeasurable potential with its applications covering many industries and sectors. Still somewhat in its infancy, the last decade has witnessed a generous body of research that seeks to exploit its uses more than we could have ever imagined.

One example comes from a team from the Georgia Institute of Technology, led by Professor H. Jerry Qi from the University’s George W. Woodruff School of Mechanical Engineering. Their aim was simple: 4D printing. Or put in a different way, to create a machine that combines multiple materials into one 3D printer (although the name conjures up images of sci-fi driven technology, this is more a scenario of greatly enhancing and improving upon existing technology through smart integration).

Discussing the goals of the research project, Qi explains the situation plainly:

“Each printer technology has its own limitations. We put four 3D-printing technologies under one platform.”

It was unveiled on Wednesday at the annual American Chemical Society (ACS) National Meeting which was held March 18th-22nd.

The details about the design, development and testing of the 3D printer were published in an article, titled “3D Printing of Highly Stretchable, Shape-Memory and Self-Healing Elastomer toward Novel 4D Printing”, in the ACS Applied Materials & Interfaces journal on February 28, 2018.

Their aim is to expand the technology into the area of “soft actuators, deployable smart medical devices and flexible electronics”.

The team was able to achieve the results by developing a special ink that contains both a linear semi-crystalline polymer and urethane diacrylate. This allows it to print on the highly elastic and porous semi-interpenetrating polymer network (semi-IPN).

The polymer-rich elastomer, which can be stretched up to 600% its original size, has greater flexibility and versatility. In the end, the materials can also achieve both self-healing (SH) and shape memory (SM) results, which is a necessary step in the direction of fully developing 4D printing.

In the end, they were able to produce a flexible conductive ribbon and wheel.

Developed with the support of the US Air Force (which is itself an indication of the scope and possible reach of the project), the printer is still in the prototype stage. Research into SH and SM polymers has been growing steadily in the past 5 years, and with this invention, the scientific community feels, rightfully so, that it has come one step closer to making 4D printing a viable reality. 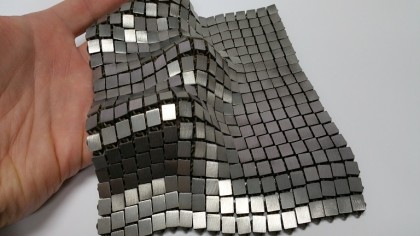 Qi also disclosed that the cost of building the printer came to about 350,000USD.

Not surprisingly, the printer was very well received at the meeting and created a generous amount of buzz. Australia-based University of Wollongong Materials Engineering Professor Geoff Spinks said of the machine, “We just had a conversation where we were dreaming of that kind of machine,” adding enthusiastically, “I’d imagine in the near future we might have 16 different types of printheads, or even more.”

With the expansion of research and development into materials combination technology capabilities, the frontier of possibilities for 3D printing grows even broader.