Engineers Create New Material that Behaves Like a Life-form

A group of scientists at Cornell University has created lifelike material powered by artificial metabolism.

A group of scientists at Cornell University has created lifelike material powered by artificial metabolism. Make no mistake, we are speaking about machines, not living organisms, as one of the researchers, Prof. Dan Luo  from Cornell's College of Agriculture and Life Sciences explains it to the Cornell Chronicle:

"We are introducing a brand-new, lifelike material concept powered by its very own artificial metabolism. We are not making something that’s alive, but we are creating materials that are much more lifelike than have ever been seen before."

While DNA is a genetic material, it is also a polymer which can be transformed and adjusted. This is what the scientists did, using DNA-based Assembly and Synthesis of Hierarchical (DASH) material to achieve a certain artificial DNA material with lifelike capabilities.

In a paper published in Science Robotics earlier this month they give all the details of this giant leap for engineering. Lifelike machines, as their name suggests, have to mimic life, or the behavior of living organisms. All living organisms are well-designed systems of self-sustainability. That happens through biosynthesis and biodegradation, the making of new cells and the decay of old ones.

The group of scientists at Cornell created a biomaterial on the nanoscale (the base sequence is extremely small, 55 nucleotide seeds) which can autonomously emerge into polymers and then even to mesoscale shapes. The DNA molecules were multiplied many, many times and eventually reached a few millimeters in size.

After that, a special liquid was injected in a microfluidic device which provides energy and essential building blocks for biosynthesis. With the help of that solution, the DNA synthesized new strands. The front end of the material grew, while the tail degraded.

It’s easy to imagine this basic locomotion if you think about the way slime molds move.

Race in the bioengineering lab and beyond

The aforementioned locomotive ability of the bio-machines allowed the scientists to race them against each other, similar to two molds competing to finish the broccoli in your fridge.

"Even from a simple design, we were able to create sophisticated behaviors like racing. Artificial metabolism could open a new frontier in robotics," said Shogo Hamada, a lecturer and research associate at Cornell. "The designs are still primitive, but they showed a new route to create dynamic machines from biomolecules. We are at a first step of building lifelike robots by artificial metabolism." 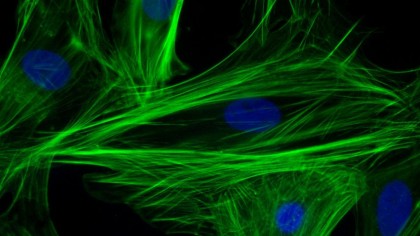 These Engineers Designed a Gym for Lab-Grown Heart Cells

The researchers are now working on programming the material so that it is able to recognize different stimuli, and even more, they want it to be able to differentiate between different things autonomously. Imagine a programmed organism-like machine which is building itself up and able to avoid harm while seeking out the things it needs, such as food.

These goals may sound futuristic, but Professor Luo is optimistic when he points out that the key innovation behind it all is the programmed metabolism of the machine, after which the machine might well just takes it from here.

"Everything from its ability to move and compete, all those processes are self-contained. There’s no external interference," Luo said.

Engineers Create Device That Can 'Communicate' with Plants

How Will Humans Create Artificial Life?