Engineers Develop Floating Bits of Food to Get Rid of Utensils

Engineers are opting to use ultrasound rather than utensils or even hands in order to give a 'purer' eating experience for our taste buds.

By  Shelby Rogers
Oct 10, 2017
Acoustic levitation of wine between the ultrasonic transudcers University of Sussex via IEEE Spectrum

One team of researchers from the University of Sussex decided utensils are too overrated. The engineers from the university's SCHI Lab created TastyFloats, a contactless food delivery system. That's right; the food goes straight from the plate to your mouth without ever being touched.

TastyFloats (which sounds more like an ice cream float company rather than an engineering project) uses ultrasound to get the food from one spot to another. It relies on both mid-air tactile feedback and object manipulation. Low-cost ultrasonic transducers form a standing wave of ultrasound. This allows for small 'bite-sized' solids and liquids to be suspended. The researchers manipulated the waves by changing the phased arrays in one of three dimensions. These changes moved the contents along with the waves and the edible goodies could float freely.

The team used the exercise to discover if what we think of food changes with no interference from a utensil or our hands. It's an interesting (and somewhat unheard of) premise -- that our taste buds could be so affected by the transportation of the food we eat in addition to the food itself. The researchers wanted to see if reducing a morsel to something that could be directly put into our mouths changed how we perceived what we ate.

In order to quantify this, the team studied three of the five basic taste sensors: bitter (negative taste), sweet (positive taste), and umami (additional savory flavor). They used a small group of volunteers to test those tastes in three different volumes. The researchers used tongue delivery via a pipette as a "non-levitating control."

The team found that in their small research size, tasters found sweets even sweeter but bitter was harder to identify.

Levitating objects using acoustical means is a feat becoming surprisingly more common. However, the objects being levitated are typically standard and uniform in size. Food and drink offer unique challenges to even the most talented researchers. Food is variable, especially given that most food items aren't necessarily uniform in size, shape, and density throughout. Liquids, however, were a bit easier. 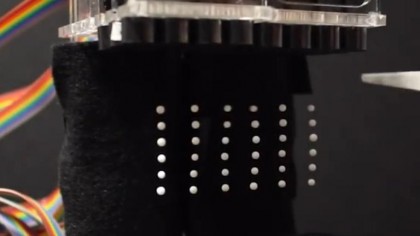 The team found that high-density foods like cheese needed more power than low-density foods. Adjustments were also made to accommodate foods of different weights so they can make it onto someone's tongue.

Sriram Subramanian is a professor of Informatics at the University of Sussex.

“Our biggest challenge in this work was to be able to control the levitation system so that food morsels are stable in the system, whether it is wine, meat, or cheese that we are levitating,” Subramanian said in an interview with Digital Trends. “In other words, we needed to find a way to control the levitation energy so that it is strong enough to hold different density food items, but not so strong that they evaporate.”

How would one even use this technology? We can't easily duplicate these arrays to float food directly to us in our own kitchens. Or can we? The researchers seem to imply that the project can, in fact, be upscaled.

"TastyFloats was demonstrated for levitating single food morsels but, as shown in the accompanying video, also provides the foundations to be expanded for multiple morsels," the researchers told IEEE Spectrum. "Complex food, such as the ingredients of a burger combining bread, meat, and lettuce can be easily levitated. We can specify and control the path of a set of ingredients and ensure that the food arrives on the customer’s tongue in the chef’s preferred fashion (e.g., first bread then meat). This opens the possibility of making recipes by mixing tastes directly on the tongue of the customer to create surprising experiences."

"What we’ve created [so far] is a first prototype that is somewhat cumbersome to use," Subramanian said. "In the future, we want to make the delivery system more robust and easy to deploy. We would also look to try and create a short movie experience which incorporates our TastyFloats system to get an idea of how users experience it. Finally, we would love to work with content developers to create content that harnesses the potential of our device. While I can easily see a more refined version of our system becoming a real-world device, this is probably a few years away."

The engineers will formally present TastyFloats to the world at ACM ISS later this month.