MIT engineers have created a low-cost passive prosthetic foot that can be tailored to individuals.

Prosthetic technologies have rapidly improved in the last decade. Products now exist that allow its users to feel, grab and win Olympic medals.

But for many amputees and other without limbs, accessing these high-tech options is impossible. But MIT engineers have now developed a new type of prosthetic foot that is simple, low cost and can be tailored to an individual's need.

If manufactured on large scale, its inventors believe it could offer a cheap and effective solution to standard prosthetic feet. If the weight and body size of the user is known, the researchers say the prosthetics stiffness and size of the foot can be adjusted to provide the user with a walking gait much more similar to an able-bodied style than other low-cost products.

"[Walking] is something so core to us as humans, and for this segment of the population who have a lower-limb amputation, there's just no theory for us to say, 'here's exactly how we should design the stiffness and geometry of a foot for you, in order for you to walk as you desire,'" says Amos Winter, associate professor of mechanical engineering at MIT.

"Now we can do that. And that's super powerful." Winter was approached by the Indian based manufacturer of artificial limbs Jaipur Foot, in 2012, soon after he joined the MIT lab.

The company makes prosthetic feet for clients in developing companies, they also have an active charity program that sees the donation of more than 28,000 models each year. They make a passive foot which is highly popular but has some design downsides.

MIT tasked to re-think the approach to prosthetics

"They've been making this foot for over 40 years, and it's rugged, so farmers can use it barefoot outdoors, and it's relatively life-like, so if people go in a mosque and want to pray barefoot, they're likely to not be stigmatized," Winter says. "But it's quite heavy, and the internal structure is made all by hand, which creates a big variation in product quality."

Jaipur Foot asked Winter if he would design a better foot that was more lightweight and would remove the need for slow and high-cost labor. 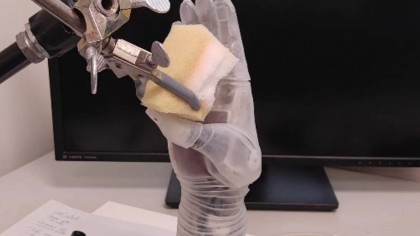 "At that point, we started asking ourselves, 'how should we design this foot as engineers? How should we predict the performance, given the foot's stiffness and mechanical design and geometry? How should we tune all that to get a person to walk the way we want them to walk?'" Winter recalls.

The engineers took a unique approach to designing the prosthetic. Instead of focussing on replicating an able-bodied foot they concentrated on the lower leg of the amputees, the part that really controls the movement of the prosthetic.

By focussing on this, the team was able to create a lightweight toboggan shaped foot that can be tweaked in stiffness and size for each individual based on their size and natural gait. The first prototypes were made out of nylon and proved very popular among the testing volunteers.

The MIT team will now work with Italian rubber company Vibram to develop a cover of the foot that will give more rebound and grip. They will then investigate ways and methods that the foot can be scaled up in production.

Engineers Create Device That Can 'Communicate' with Plants

Freedom at a Cost: The Burdens and Benefits of Giving Up Your Data Privacy