This newly discovered massive planetary body is more than a dozen times bigger than Jupiter and features a mysterious auroral glow.

Last February, astrophysicists used microlensing to discover for the first time planets outside our Milky Way. Now, astronomers using the National Science Foundation’s Karl G. Jansky Very Large Array (VLA) have made the first-ever radio-telescope detection of a planet beyond our Solar System.

VLA is the same tool used last year to measure a distant galaxy's magnetic field. Now the array has revealed a planetary-mass object more than a dozen times bigger than Jupiter with a mysterious auroral glow.

At the boundary between a planet and a brown dwarf

“This object is right at the boundary between a planet and a brown dwarf, or ‘failed star,’ and is giving us some surprises that can potentially help us understand magnetic processes on both stars and planets,” said study lead Melodie Kao. The question of where the line between a brown dwarf and a massive planet lies has plagued astronomers for years.

Brown dwarfs are planetary bodies too large to be classified as planets but not massive enough to sustain the hydrogen nuclear fusion that powers stars. In 2001, VLA uncovered the first signs of radio flaring in a brown dwarf leading to further observations that confirmed that some of these bodies did indeed have strong auroras.

Scientists have yet to determine how these solitary objects could sustain auroras but have stipulated they could be a result on an orbiting planet or moon interacting with the brown dwarf’s magnetic field. The newly discovered object, called SIMP J01365663+0933473, has been found to have a magnetic field 200 times more powerful than Jupiter’s.

The planetary body was originally detected by VLA in 2016 but was believed to be an old brown dwarf. Last year, an independent team of scientists discovered the object was, in fact, part of a very young group of stars meaning it could have been far larger.

The new data revealed the body to be 12.7 times more massive than Jupiter. The information would indicate that SIMP J01365663+0933473 meets the “deuterium-burning limit," a term used to describe a planetary mass below which deuterium fusion ceases measured at around 13 Jupiter masses.

This limit is one of the criteria astronomers use to differentiate between a brown dwarf and a massive planet. “When it was announced that SIMP J01365663+0933473 had a mass near the deuterium-burning limit, I had just finished analyzing its newest VLA data,” said Kao. 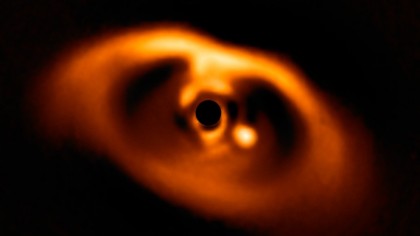 In addition to providing the first radio detection of the object's magnetic field, VLA also provided the field's first measurement. The Caltech team that originally detected SIMP J01365663+0933473's radio emission in 2016 confirmed that the field was even stronger than first presumed.

This revelation “presents huge challenges to our understanding of the dynamo mechanism that produces the magnetic fields in brown dwarfs and exoplanets and helps drive the auroras we see,” said Gregg Hallinan, of Caltech. Hallinan added that the discovery of the object through its auroral radio emission means that VLA can now provide "a new way of detecting exoplanets, including the elusive rogue ones not orbiting a parent star.”